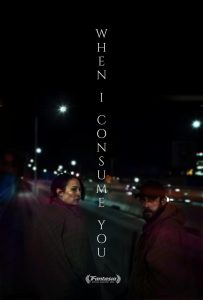 It’s tough to escape the trauma of one’s past. For brother and sister Wilson (Evan Dumouchel) and Daphne Shaw (Libby Ewing), the past is always lurking in the shadows with hungry eyes in writer-director Perry Blackshear’s dark revenge saga When I Consume You.

The film centres on the relationship between the siblings, who clearly escaped a difficult childhood only to find themselves fighting to keep their heads above water in the unyielding belly of New York City. One of When I Consume You’s strongest elements is its use of Brooklyn’s Greenpoint area as a location, with Blackshear’s camera crawling over the shoebox apartments, chainlink fences, and warehouse-lined streets in all their dirty, stripped-back simplicity. It’s not a side of the city that we often see in films, which tend to gravitate toward the bright lights and slick skyscrapers of Manhattan, and it helps to amplify the challenges the pair are facing as Daphne battles addiction and Wilson tries to find work that feels meaningful to him.

Daphne’s sudden death devastates her brother, but Ewing is not out of the movie yet: she returns to warn Wilson that the malevolent force which ended her life has set its sights on him. The introduction of Daphne’s ghost is handled beautifully, all darting hands and subtle shifts in the sound design. But things take a turn for the absurd when she reveals herself fully and kickstarts a Rocky-style training montage to toughen Wilson up, replete with jogging at the crack of dawn and swallowing raw eggs. Oh, and removing the whimsical elements from his home, like his collection of potted plants named after Lord of the Rings characters.

The idea that Wilson needs to leave childish things behind and become a man feels oddly disconnected from the film’s broader messages about overcoming inner demons, especially considering both siblings’ connections with children (Wilson wanted to become a teacher and Daphne was trying to adopt). While there’s something to be said for facing the harsh truth, learning to stand on one’s own, and moving on as opposed to retreating into a make-believe world, the person Wilson becomes doesn’t seem inherently better than the shy boy who came to life when playing fantasy games with his sister before her death. Perhaps that’s the point: dealing with trauma isn’t necessarily cathartic, yet it is necessary. But the script struggles to connect Wilson’s journey to his final confrontation with the malevolent entity, instead throwing in a deus ex machina involving Buddhist mysticism that feels ill-conceived given that the protagonists are white Americans.

Still, there’s a lot to love in When I Consume You, including strong central performances from Ewing and Dumouchel and an enjoyable turn from MacLeod Andrews, whose late arrival in the picture brings an electric new energy to the proceedings. As a bleak, character-driven piece that’s frequently creepy, When I Consume You excels. But some muddy messaging, messy plot revelations, and a somewhat lacklustre climax hold it back from quite reaching the heights that its fingertips brush.