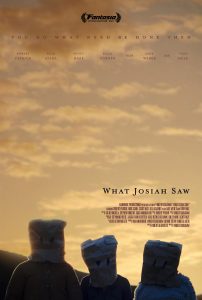 If you like your horror bleak, they don’t come much bleaker than director Vincent Grashaw’s sprawling Southern Gothic tale What Josiah Saw.

Told in four parts, What Josiah Saw centres around a family forever scarred by childhood trauma. There’s Eli (Nick Stahl), an ex-con who can’t seem to stay out of trouble, Mary (Kelli Garner), who is taking shaky steps toward starting her own family, and Thomas (Scott Haze), a man with an intellectual disability who has returned to the siblings’ childhood home, the farmhouse where their mother died by suicide. With a heavy limp and wild hair, patriarch Josiah (Robert Partick) is an intimidating presence stalking around the homestead, swigging whisky and browbeating Thomas every chance he gets. Each sibling gets their own storyline that allows us to get to know them and the paths they’re on, but those pathways all lead inexorably back to the site of their trauma, the farmhouse where terrible, unspoken secrets lurk in the shadows.

Robert Alan Dilts’ script is a fascinating tetraptych, giving the film the opportunity to play with different tones and embrace the variety of its Oklahoma setting, from rural farmland to rugged mountains to manicured suburbia. Feeling almost like an anthology at first, each chapter gradually reveals the characters’ connections and hints at the abuses they’ve endured. Small details that feel like interesting character quirks become all the more meaningful and horrifying in the context of the film’s shocking conclusion—a conclusion that’s so uneasily ambiguous it will leave you searching for the nearest shower to scrub it out of your pores.

All the central players are incredibly compelling to follow, with Stahl’s Eli being particularly well fleshed out. While his segment does shift the film into new genre territory, Grashaw’s direction and Carlos Ritter’s cinematography ensure that What Josiah Saw maintains an air of gloom and anguish at every turn. But the unbalanced nature of the script means that Garner gets the least to do, making her character feel somewhat slight compared to her brothers. Considering what we later learn about Mary, that’s a real shame, though Garner still manages to make us feel her character’s deep pain and sadness, even in her limited scenes.

Clocking in at two hours but never feeling its length, What Josiah Saw is a slow-burn nightmare that lingers long in the mind. The film’s darkness builds slowly like storm clouds forming in the sky—but when it finally rains, it pours.