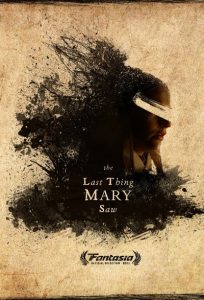 Love hurts, especially when you’re the daughter of a Puritanical family and you’ve fallen for another woman. That’s the premise of first-time writer-director Edoardo Vitaletti’s The Last Thing Mary Saw, a moody religious-tinged chiller set in rural New York in 1843.

The film stars Stefanie Scott as the titular Mary who, after discovering a book of scandalous (for the time) wood carvings in her family’s home, begins an ill-fated love affair with the maid, Eleanor (Isabelle Fuhrman). Horrified, Mary’s parents turn to the family Matriarch (Judith Roberts), who prescribes some correction of the painful kind. But even agonising punishments can’t keep Mary and Eleanor apart, sending them down a path paved in blood and murder.

Despite being an LGBTQ+ story, The Last Thing Mary Saw feels somewhat tame in its exploration of forbidden love. Little time is dedicated to the romance, especially in its early stages, and the presence of the book—while an intriguing narrative device—ultimately robs Mary of some of her agency. While it’s entirely possible that the family is misguided in believing that the book triggered Mary’s lesbian desires, the film’s noncommittal handling of this issue leaves a strange taste in the mouth.

Roberts and Fuhrman do their best with their subdued roles, but it’s really only in moments of righteous fury, not love, that they have opportunities to shine. Fuhrman’s Eleanor bears the brunt of the film’s wince-worthy suffering, adding an interesting dimension of classism to the tale. But it’s Roberts who steals the show, delivering an exceptionally creepy performance even before the script gradually begins to pepper in supernatural elements. Rory Culkin’s sinister intruder shows up late in the runtime to spike the hauntingly oppressive atmosphere with a much-needed element of imminent danger, carrying us into a climax that delivers more shivers than it does screams.

A quiet, slow-moving period piece, The Last Thing Mary Saw is masterful in tone but meagre in character building. Bolstered by an eerie score by Keegan DeWitt, Vitaletti and the production designers do a stellar job of creating a claustrophobic environment in which impending doom hangs heavy in the air. But the film can only ever seem to rise from its melancholy slumber to unsettle, never scare.