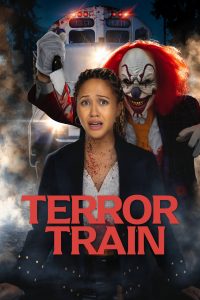 Some remakes try to do their own thing, some aim for shot-for-shot accuracy, and others fall somewhere in the middle, often trying to patch over cracks while maintaining the original wallpaper. Director Philippe Gagnon’s Terror Train remake is very much of the latter variety—a faithful-to-a-fault reimagining that makes little more than minor cosmetic changes, right down to recreating the title sequence and the costumes worn by its cannon fodder. Whether or not that appeals to you may depend on how much you enjoy the 1980 version.

The remake follows Robyn Alomar’s Alana, a college senior who was involved in a cruel prank that traumatized a fraternity pledge and led to him dropping out of school. On Halloween night, she boards a party train along with her fellow students and a magician they’re inexplicably hired. But a masked killer is intent on spoiling the fun, and with costumes as far as the eye can see, everyone’s a suspect.

The original Terror Train is primarily remembered for three things: a fresh-off-of-Halloween Jamie Lee Curtis, a staggering amount of David Copperfield, and a hidden-in-plain-sight twist that, while certainly surprising, is tainted with a troubling trace of transphobia. The remake removes that uncomfortable element but struggles to deliver any fresh surprises in its place. Considering that this is one of the few big changes that writers Ian Carpenter and Aaron Martin made to the material (and one they pilfered from another well-known horror film no less), the reveal of the killer will leave you wishing they’d taken bigger risks.

Schitt’s Creek’s Tim Rozon replaces Copperfield as “The Magician,” somehow managing to be the most entertaining and least believable part of the film. Copperfield’s magic skills allowed him to perform stunts that were genuinely quite entertaining to watch, which is lucky since we were subjected to several uninterrupted minutes of them. Rozon, on the other hand, is left with a bag of cheap tricks that wouldn’t impress a five-year-old child, let alone a group of cynical college seniors. And while Copperfield was in his early twenties at the time of filming, Rozon is in his mid-forties, adding a layer of discomfort to his casual flirtation that doesn’t feel entirely intentional, especially as the character is ready to leap into hero mode whenever it suits the plot. The actor plays the role with a smarmy charm, but the idea that these students would hire him for their night of drunken debauchery feels even less believable than it did in the eighties.

The rest of the cast is mostly forgettable, though Mary Walsh seems to be having fun in her few scenes. The train itself is also a disappointment, with little effort being made to make the sets feel like tight, shaky compartments as opposed to roomy sets. It doesn’t help that the kills are virtually identical to the 1980s version, right down to the cherry-red blood that horror films left behind decades ago. There’s something to be said for simple knife-to-neck action, but decades after the slasher boom that birthed the original, this comes across as practically quaint.

It’s difficult to know who Terror Train (2022) is for, really. Fans of the original will likely find the by-the-book approach dull, while newcomers won’t be lured in by the title. There was an opportunity here to examine college hazing culture through a modern lens, but the script remains frustratingly surface level. If you’re looking for a silly slasher to put on in the background of a party, this will do the trick, but anyone looking for an off-the-rails thrill ride will leave disappointed.