[BHFF] MOTHER, MAY I?: FILM REVIEW 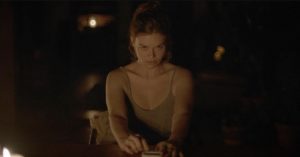 Most movies about hauntings revolve around a single hypothesis: what is buried will once again come to the surface. Writer-director Laurence Vannicelli’s Mother, May I?, while not a conventional ghost story, is no exception, exploring repressed abandonment issues through a possible case of possession.

The film follows Emmett (Kyle Gallner), a young man who has been estranged from his mother since childhood—though, we soon learn, perhaps he wasn’t quite as young as he says he was when the abandonment happened. When his mother dies and leaves him her large, isolated house in upstate New York, Emmett travels to the remote location with his fiance Anya (Holland Roden), a struggling poet, looking to get it appraised.

It doesn’t take long for the cracks in the couple’s relationship to start showing. Frustrated that her partner is bottling up his emotions, Anya insists they engage in an exercise where they pretend to be one another and talk about how they’re feeling. But after taking hallucinogens, the already questionable exercise seems to open the door for something else to invade Anya, with her suddenly acting like Emmett’s mother and refusing to stop.

Mother, May I? is something of a frustrating watch because it wants to have its cake and eat it. The script wants us to believe that Anya is possessed, but it also wants to play with the idea that she’s manipulative and faking it. There are a few spooky supernatural elements peppered throughout, but they’re never explored enough to feel fulfilling. Ambiguity isn’t always a bad thing, but it can be when the script seems to think it’s cleverer than it really is.

But Mother, May I? is less about plot than it is about characters, establishing an intimate setting for its two leads to showcase everything they’ve got. Horror fans will likely recognise Gallner; he’s been making quite the name for himself in horror over the past decade, most recently appearing in box office hits Scream and Smile. Here, he has a lot more to do, but his character isn’t particularly likeable. Roden is the standout, especially in mother mode, but the film gives us so little time with Anya before her transformation that it has to rely on obvious visual cues and character traits to signal that she’s someone else. Roden still makes the characters her own, but a more subtle shift would have aided the film’s attempts at ambiguity.

Once Anya snaps back to herself, Mother, May I? doesn’t have many places to go, digging itself into deeper and deeper holes as its characters reveal their increasingly unlikable personalities. Surprisingly, Emmett’s late mother becomes the most relatable character, despite her many, many flaws and unflattering quirks. We never meet her, seeing only the back of her head as she dies, but her presence is keenly felt throughout. Emmett is given the chance to reconcile with the woman who never really wanted him even as he and his fiance try to conceive to save their failing relationship, seeming to learn next to nothing from the experience.

People will say that Mother, May I? is about how men ultimately just want to marry their mothers, and the film certainly lends itself to plenty of jokes of that nature. But really, it seems to be about people who hate one another staying together for all the wrong reasons and thinking that a baby will fix things. It’s interesting, sure, but that doesn’t necessarily make it enjoyable to watch.