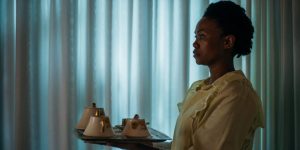 The idea of something gone but not forgotten is at the heart of any good ghost story. Despite a few supernatural touches, it’s the lingering trauma of apartheid that haunts director Jenna Cato Bass’s Good Madam (Mlungu Wam), a striking psychological horror film set in a distinctly white neighbourhood of South Africa.

The film follows Tsidi (Chumisa Cosa), a woman caught between a rock and a hard place. After the death of her grandmother, with whom she’s lived for some time, Tsidi finds herself at the mercy of the men in her highly patriarchal family, prompting her to take daughter Winnie (Kamvalethu Jonas Raziya) and seek shelter with her largely estranged mother, Mavis (Nosipho Mtebe), the live-in servant of a wealthy but ailing white woman, Diane (Jennifer Boraine).

Diane’s comfortable home has never felt particularly welcoming to Tsidi, even though Mavis insists that the “Madam” treats them like family (a notion instantly called into question when we see Mavis’ small, dingy room in the big house). Perhaps it’s the fact that Diane’s European-style home bears the still-bleeding scars of colonialism, its walls and shelves teeming with African art and artefacts juxtaposed with pictures of the Madam and her white family. Or, perhaps it’s the fact that the fiercely independent Tsidi is unwilling to play one of the roles that the whites in the neighborhood clearly expect of her—that of either servitude, like her mother, or gratefulness like her half-brother, Gcinumzi (​​Sanda Shandu), who was raised by Diane while his own mother scrubbed the woman’s floors. Renamed Stuart by his pseudo-adoptive family, Gcinumzi has deliberately left his heritage behind in order to move in white circles, to the point where he stubbornly responds in English when his family talks to him in Xhosa, leading Tsidi to complain that she needs Google Translate just to communicate with him.

Cosa delivers an exceptional performance as Tsidi. In early scenes, she strikes a delicate balance between making her character feel justifiably defiant and unreasonably reckless for ignoring her mother’s pleas and jeopardising her position—a position that Mavis can’t afford to lose and clearly cares deeply about (though, as the film goes on, the true cause of that loyalty is shown to be sinister). The script—credited to Bass, Babalwa Baartman, and several members of the cast—leaves us guessing at just how reliable Tsidi is as a focal point of the narrative. Is she coming undone, or is a long-dead dog really roaming the halls?

By the time it’s revealed that the graveyard on the grounds is filled with former servants, however, we’re screaming at Tsidi and her family to get out, all while knowing there’s nowhere for them to go. Servitude has given Mavis a home, but it’s also left her beholden to her Madam, terrified of what will happen when the woman dies, while Tsidi’s resistance to such a life has only brought her right back to the house she so despises. Even from her deathbed, the coloniser’s grip on them remains oppressively tight—and we’ll soon learn just how tight that grip really is and how deeply Diane’s family has plundered their culture.

Tsidi’s frustration and desperation make Good Madam vibrate with a nervous energy that is amplified by the restless sound design, mixing everyday domestic noises—the relentless scrub of a brush against tile, water gurgling in the drain—with wavering voices and whispering sounds that make the house and the darkness beyond feel alive and unsafe. Further, Diane’s presence hangs over the space, even though her physical body is barely seen, with Bass frequently cutting to a photo of the woman in her prime, her smile reading less and less pleasant as the story progresses. This all serves to keep viewers in a near-constant state of unease despite the fact that, barring a few flashes of something unsettling, Bass keeps the horror bubbling just beneath the surface until the film’s terrifying climax, which features one of the most horrific images you’re likely to see all year.

At times explicit, other times teasingly opaque, Good Madam will frustrate some viewers looking for horror wrapped in a neat bow. But for those willing to follow the film down the uncomfortable path it gestures toward, the journey is just as fascinating and upsetting as the destination.