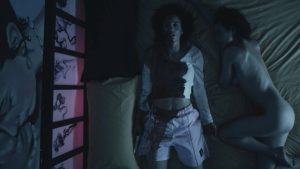 While there will no doubt be a slew of virus-related horror to come out of the pandemic, the simple terrors of staying at home are prime fodder for some psychological chills. Director Alfonso Cortés-Cavanillas digs deep into the anxiety and isolation of lockdown in his homebound horror film, Ego.

Set during the early days of the pandemic, the film follows Paloma (María Pedraza), a young woman living with her mother (Marian Álvarez) in an apartment in Spain. Paloma’s father has recently died by suicide in the home, a trauma that Paloma—struggling with her own mental health issues—clearly hasn’t processed yet. Lonely, depressed, and now trapped inside the site of this trauma, she seeks solace in a lesbian dating app, leading her to stumble upon her doppelgänger, Goliadkin (played by Pedraza in a dual role), with horrifying results.

Pedraza skilfully differentiates the vulnerable Paloma from the cool, self-assured Goliadkin through her body language and tone. There are certainly shades of 2018’s Cam here, but the script (written Jorge Navarro de Lemus) uses the idea of an internet doppelgänger to explore some new territory, touching on concepts like catfishing, self-obsession, and living a different life online. In one particularly unsettling scene, Paloma masturbates to the image of her double undressing, infatuated by this version of herself who seems so much more confident, independent, and alluring.

Of course, Goliadkin’s motives are far from pure, and over the course of a week, she starts to terrorise Paloma and send her mental health spiralling. The script leaves us guessing how much of what Paloma is experiencing is in her head, with some of Goliadkin’s appearances—including a superbly creepy shot involving a mirror—suggesting either a supernatural element or a mental breakdown. The film also takes the threat of an exact duplicate in some interesting directions, masterfully sowing seeds of paranoia that leave Paloma with no lifelines she can rely on. While the dangers of the pandemic itself are largely left unspoken, the terror of opening the door to your safe little bubble, even for someone you know, is always lurking in the background.

With limited outdoor locations, Cortés-Cavanillas makes great use of the apartment, taking us round and round the space in a way that echoes the restless energy of those stuck inside. The director isn’t afraid to take his time getting to the scares, yet the tight timeline of the film—taking place over the course of a single week—makes Paloma’s mental health crisis feel a little rushed. While Pedraza’s nuanced performance ensures Paloma’s descent from more-or-less coping to utterly broken feels believable, it would have been interesting to see this story play out over a longer period, especially now that we know just how long the initial lockdowns lasted. That said, as anyone who’s ever wrestled with their mental health will likely tell you, sometimes getting through a week is difficult enough.

One of the first great horror films of the pandemic era, Ego feels both fantastical and upsettingly familiar. Anchored by a raw and relatable performance from its lead, it’s a chilling time capsule of a period we’ll hopefully never have to live through again.