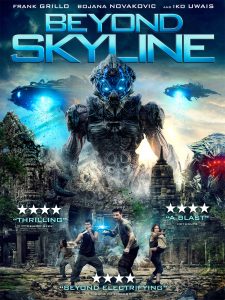 Synopsis:
In the sequel to 2010’s sci-fi Skyline, Frank Grillo plays a detective who must fight to save his son when aliens invade, kidnapping most of the population and trapping them in their warship.

In a surprising turn of events, I’d like to report that Beyond Skyline is actually a decent sequel. By refreshing the events from the dull first film, Beyond almost re-tells the story as it follows an alien warship abducting people from the city as they drawn by the mysterious light from the invading ship. Rather than focusing on a group of friends like the first so dreadfully did, this one puts a strained father-son relationship front and centre. It’s extremely cheesy in parts and, by the end, you’ll predict them to be the best of friends, but the events that lead to this expected eventually are exciting, action-packed and, most importantly, fun.

Skyline was an over-CGI’ed mess that over-compensated for its poor storyline with over-blown special effects and unimpressive action scenes. Beyond Skyline has its fair share of CGI and special effects, but this time, it doesn’t feel as though it’s disguising a lack of plot with distracting visuals. The action serves a purpose and adds a genuine intensity, driving the plot forward and generating necessary suspense. It’s not perfect and there are many moments when you’ll have to suspend your disbelief – There is a moment when Mark (Grillo) uses a nail from his leg to climb back onto the ship and it’s super badass, but wholly unbelievable. Grillo is also brilliant at shouting at people to “Move! Move!” so he plays the strong hero and leader with ease, as always.

Martial arts star Iko Uwais further adds an exciting layer to the film, so be ready for excellently choreographed fight scenes between Uwais and Grillo, before they realise it’s probably a better idea to team-up and face the real enemy: the aliens! This paves the way for more fun, because who wouldn’t enjoy seeing Uwais in hand-to-hand combat with an an alien three times his size? His frequent co-star Yayan Ruhian is also on-hand to deliver some serious punishment to the alien invaders. The blend of sci-fi and martial arts action works a treat, injecting the film with creativity and proving that director Liam O’Donnell wants to surprise his audience.

Beyond Skylines delivers all you want from a blockbuster: a generous helping of cheese, plenty of action and a plot that is slightly high-concept, but nothing too strenuous. It borrows a lot from previous sci-fi features and there’s nothing thematic that you’ve not seen before. It even steps into territory similar to Ridley Scott’s Prometheus, but to avoid spoilers, I won’t delve into that too much. It’s not as complicated as it believes itself to be, but Beyond Skyline is, at least, not a completely mindless sci-fi adventure.

All in all, Beyond Skyline is a surprisingly impressive. If you go in with low expectations you’re sure to come out with a smile on your face, because this all that a film like this needs to be. It’s an exciting, surprising and a full-blown entertaining actioner that is certainly worth a watch.

Released on Digital in UK and US on 15th December, and Blu-ray and DVD in UK on 8th January