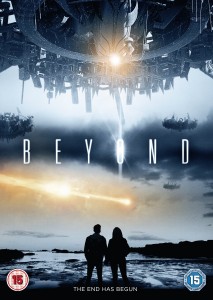 Synopsis:
After intervening in a convenience store robbery which sees the shop worker shot in the stomach, Cole is invited by a friend for a drink. Deciding he could do with one, he ends up at a house party where he meets Maya, with whom he talks about the headline-dominating asteroid which in less than three years will either hit or pass close to, Earth. A few years later and Cole and Maya are living off the land after much of the human population has been wiped out not by the predicted asteroid collision, but alien invasion. Cutting back and forth between the years before and after the visitors set up camp in their floating fortresses, the story of Maya and Cole’s turbulent relationship unfolds.

Independence Day aside, the alien invasion flick had fallen out of fashion in the latter part of the 20th century, ever since George Lucas took science fiction far away from our planet in favour of more fantastical worlds. Post-9/11 though, genre cinema has been forced to reflect a fearful, paranoid West with tales of foreign invaders who appear to think a little differently to us. Films such as District 9 and Gareth Edwards’ low-budget breakthrough Monsters have provided us with altogether more human takes on the alien invasion film; the focus has been taken from the invaders and placed more onto the inhabitants of this planet, and their struggles to survive in an irreversibly changed world.

Set and shot in the Scottish countryside, Beyond follows in this trend, using the backdrop of an alien attack to tell a human story about an obstacle-ridden relationship between two troubled souls. Sprinkled in are elements of horror and the obvious sci-fi scenario, but these barely infiltrate the dystopian drama which lies at Beyond’s core. Directors Joseph Baker and Tom Large refuse to placate us with action beats and we never even see the aliens (though we are teased with a scene in which Maya is invited to view photos, which we are not privy to), making clear that the two lead characters are to be our focus.

By the time the pace picks up for some third act revelations, you’ll find yourself immersed in the couple’s story, although Richard J. Danum’s performance as Cole makes this initially rather difficult. The character seems an almost entirely humourless pessimist, and is played so flatly by Danum in the opening scenes that it feels all but impossible to invest into his plight. He talks condescendingly and self-righteously to the gun-toting robber in the opening scene, and seems uncomfortably conservative, harbouring a tabloid-like outlook which may or may not be a deliberate character flaw. He tells the robber to “go get a job”, suggesting that he’s too much of a “pussy” to do so. When he meets Maya, he for some reason is too ashamed to admit to being a builder. Then there’s the fact that Cole must be a bloody nightmare to live with, particularly after the invasion. Despite Maya demonstrably being the stronger and more stable of the two, Cole is constantly ordering her to stay inside whichever abandoned property they are shacked up in at the time. Despite all of this however, their argumentative relationship does become very involving. The daughter Maya gave birth to just before the invaders arrived was, the couple believe, taken by Maya’s parents to Norway (the country’s lengthy daylight hours providing a haven for survivors from the aliens, who only come out at night). Their pain at being separated from their baby makes for some moments of real poignancy, not least when, having not eaten for days, they decide to eat the babyfood they had been saving for their daughter. The scene conveys a deep sense of hope lost, a tear rolling down Maya’s cheek as she eats.

The constant back-and-forth of the narrative is Beyond’s greatest strength, allowing us to see the foundations of Maya and Cole’s relationship alongside their battle for survival post-invasion. The first cut forward in time is jaw-dropping. From Cole dancing uncomfortably with Maya at the party nearly three years before the asteroid is expected to hit we jump to a bearded Cole, attempting to fish with a knife on a stick while a weary Maya goads him from the riverbank. It’s a jarring moment that instantly establishes the dual-timeline and its reflective nature. From here on in we see a troubled couple learning to be happy together (and initially succeeding) pre-invasion and the bleaker prospect of two very different people staying together through necessity in the months following the aliens’ arrival. We begin to learn however, that the relationship was becoming increasingly strained as the asteroid’s impact seemed nearer. Maya becomes pregnant, bringing new stress to a couple who had never expected or wanted children, let alone in a world apparently soon to be decimated. Then there’s Michael (Under The Skin’s Paul Brannigan), the wounded shop worker who is a frequent presence, loitering around Cole on his regular visits to the hospital. He becomes a constant embodiment of Cole’s guilt over his own hard-headedness which indirectly led to Michael being shot. In a film which focuses very much on its two leads in fact, Michael becomes more and more important to the plot, bringing it, in a weird sort of a way, full-circle come the third act.

Kaleidoscope’s DVD presents the film very nicely indeed. The picture is crisp but retains the inherent muddiness of the shots of grey skies and weather-beaten Scottish hills. It’s a shame the extras go no further than a trailer, as a little insight into the film’s conception could have been fascinating. Perhaps Kaleidoscope may unearth something for the DVD’s release.

Bleak, involving and daring in its restraint, Beyond is perhaps best served as a character-driven drama as opposed to an alien invasion flick. A small budget can go a long way in a film of this type, and the few effects scenes do not suffer, the alien’s floating cities looking substantial and scarily imposing behind dark clouds. The emotional wounds of the two leads are deeply felt, and become ever-more exposed as we journey to a finale which will leave you staring agape even as the credits roll. A more likeable and relatable Cole would have made this one a real winner, but tolerate his po-faced gloom and apparent conservatism and you’ll be rewarded with a meditative and thoughtful piece of cinema.