Better Watch Out Clip Cuts Us Off

Riding a wave of glowing reviews after Fantastic Fest, festive slayride Better Watch Out will be heading to screens in just a couple of weeks. As an early present, you can now unwrap this tense new clip from the film, in which Olivia DeJonge’s Ashley, together with Levi Miller’s Luke and his friend Garrett (Ed Oxenbould) find their lines of communication cut by some intruders intent on ruining their festivities. 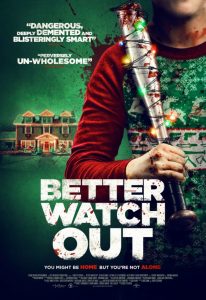 Better Watch Out hits US cinemas on October 6th, alongside an On Demand release.