Some of us live to get spooked. A good ghost story, slasher movie, midnight wander through a graveyard, or even scary online slot machine (we found these no deposit slots to be fun) makes us feel alive. These are all fine but they’re not exactly interactive. Let’s face it, without our participation in the horror, it’s hard to truly lose yourself in the moment and get sufficiently scared. Movies often struggle at cranking up the fright factor to the maximum, it’s usually some other noise in the immediate vicinity that makes us jump out of our seats. It could be a car door slamming outside, or the cat cautiously creaking a door open upstairs but it’s rarely the murderer predictably leaping from the shadows as our hero cautiously approaches. Meanwhile, if you’re out urban-exploring through dilapidated old buildings where all manner of horrors could have taken place, a fully interactive experience is much less desirable. Let’s face it, we’re trying to get spooked, not actually butchered! 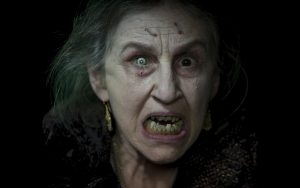 Enter the interactive horror website. These spine tingling creations have all the chill factor of the best psychological slash-a-thon going with the audience participation of wandering around a graveyard on a wintery Friday the 13th. The best part is you’re guaranteed a safe spooking without even having to put on a pair of pants! There are plenty out there to choose from so we put in the leg work for you, and whittled down a shortlist. Get ready, and prepare for a scare.

Hashima Island
We’re starting our list with Hashima Island. The concept here is a novel one. We’re on a real-life, deserted Japanese island. The place was once a thriving coal mining community that was abandoned in around 1974. Google Maps were kind enough to explore this wasteland for you, and using the “street view” controls you’re probably well-used to, you can navigate your way through the once-thriving streets. However, all is not what it seems on Hashima Island, as the bravest amongst you will discover.

There are six different areas on the island: Nikkyu Flats, Stairway to Hell, Block 65, Primary School, Glover House and The Coal Mine. At first, you’d be mistaken for thinking that it was just an urban exploration simulator but the eerie sound effects and flickering monochrome images hint at something far more sinister. We’ll not give too much away, but some devious soul has thrown in plenty of possibilities for peril!

Creepypasta
Creepypasta is the internet’s one-stop-shop for ghost story writers and readers. It might not be interactive in the truest sense – there’s no gameplay elements – but the volume of ghastly tales makes it well worthy of inclusion on this list. Contributions come from the community, so the standard can vary dramatically. The site does provide users the opportunity to rate each “pasta” (story) and this means that readers seeking quality can quickly find the tales that have been deemed most diabolical – in the best sense of the word.

It’s a website for creative creepsters, and makes for ideal reading at a Halloween party. Simply kill the lights. Shine a torch up from beneath your chin, and give your friends the fright of their lives!

The Outbreak
If you love low budget zombie movies but wish you could be a little more involved in the story, The Outbreak is the website for you. It’s a game of sorts, and closely resembles the “pick your ending” horror books that were popularised by the Goosebumps series. Each scene ends with a choice for the viewer. Selecting one option will send the narrative in one direction, and the other a different – usually with fatalistic consequences for the main characters.

The movie itself is surprisingly well-made. You’d expect with a lower budget, there’d be the kind of wooden acting that’s synonymous with late night flicks on the “Sci Fi”, or “Horror” channel. This isn’t the case, however. Obviously, no Oscars are getting handed out for it but it’s more than passable. One potential flaw with The Outbreak is that the story hasn’t been particularly well-developed. There’s no indication as to why these characters are trapped in this house, and no real clue as to what created the zombie apocalypse unfolding just outside the front door. Personal preference will dictate just how much this detracts from the fun though. Sometimes, the “how’s”, “what’s”, and “why’s” are superfluous to a good scare session.

The Grudge
This one is based on the 2004 movie of the same name (well duh). It’s a classic point and click game that’s guaranteed to scare the pants off you. There are strong Resident Evil vibes, and the creator has done a genuinely terrific job of creating a harrowing atmosphere.

Gameplay begins with the player being asked to enter their name. This personal touch makes the action all-the-more real, and is a nice start to the game. The backstory is that we’ve been accepted to cover a few shifts at a residential care home. Sounds innocent enough, right? Well, when we arrive, it quickly becomes apparent that this is no five-star facility.

It’s dark, of course, and dingy. That unmistakable horror movie camera filter has been used, and this gives the action a sinister feel. The game itself consists of exploring the house, and doing a few small jobs around the place. There isn’t much to it, but the true horror comes when the star of the original movie appears. Kayako will pop up entirely at random. It’s pot luck whether you get through to the end but it’s not about completing the tasks – it’s about scaring yourself stiff!

Jump Scare Games
Our final selection prides itself on providing the internet’s best collection of free online horror games. Titles range from the hilarious to the truly terrifying. The horrific “Scary Maze Exorcist”, “Five Nights at Freddy’s”, and the deceptively-titled “Ice Cream for Free”, are prime examples of the top content on the site.

With such an extensive catalogue, Jump Scare Games can provide hours of fun. Not all of them are winners but navigating around is simple, and the most popular have been grouped together. It’ll not take you long to find the ideal title with sufficient scare to keep you entertained.