Bernard Rose Would “Love” to do a Candyman sequel

1992’s Candyman is one of my favourite horror films, but the sequels were rubbish. This is usually the case with films in general, with the stories spawning after the original sadly disappointing.

Candyman: Farewell to The Flesh arrived in 1995 from director Bill Condon and Candyman: Day of the Dead was released in 1999 with Turi Meyer at the helm, but neither continued the story of the first and that was a shame. In the end of the first film we see Helen conjured by Trevor who chants her name five times in the mirror, leading her to kill him with Candyman’s hook and thus become a monstrous legend herself. 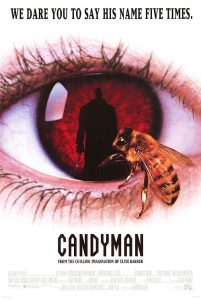 When speaking in a recent interview, Bernard Rose, who most recently directed a superb adaptation of Frankenstein, declared his desire to direct a “proper” Candyman sequel that would see the return of Helen and actress Virginia Madsen. When asked if he’d like to continue the story of the first, he said:
“Yes, desperately! I would love to do the proper sequel. There are all sorts of reasons why it’s never happened. I think it would be great, but of course unfortunately I don’t control the rights, otherwise I would just do it.”

Obviously the final decision to do a follow-up to Candyman is out of Bernard Rose’s hands, but it’s inspiring to know that he would be up for directing a sequel if he were given the opportunity. Let’s make this happen, please.