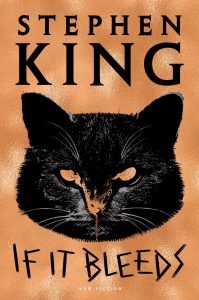 Ben Stiller has optioned the Stephen King novella Rat from the author’s recent four-story collection If It Bleeds.

Reportedly, Stiller plans to direct, produce, and star in a film adaptation of the tale, which centres around a writer named Drew Larson. Larson has turned to academia because every time he tries to turn a good idea into a novel, things seem to go horribly wrong—either physically, mentally, or both. But his latest idea for a Western thriller is so good he can’t resist, heading out to an old family cabin in the woods to get the book done.

When things go predictably wrong, Larson winds up striking a sinister bargain with a rat. Larson’s writer’s block will end… But in return, one of his loved one’s will die.

This isn’t the only novella from If It Bleeds that’s heading to the screen. Blumhouse, Ryan Murphy, and John Lee Hancock are adapting the story Mr. Harrigan’s Phone, and Darren Aronofsky’s production company Protozoa has optioned The Life of Chuck. And since the titular story from the collection centres around Holly Gibney, a central character in King’s 2018 novel The Outsider, it’s possible that it may be woven into the second season of HBO’s series of the same name, presuming the show is renewed.