BED OF THE DEAD: Film Review 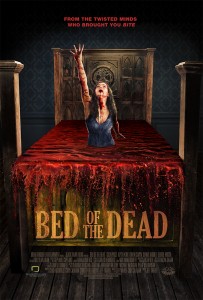 Maher’s cinematographer background shows from the outset, with a beautifully lensed period opening detailing the birth of the titular bed, which was made from the wood of a tree used for executions. The sun-kissed scene is drenched in the last bit of daylight we will see, with the remainder of the film taking place over one night, and predominantly in one room. In the present day, Virgil – a tortured detective with a dark history – is called to the aftermath of a fire at a sex club, where four people have died. As he looks over the charred bodies, we are taken back to the events leading up to the fire, just a few hours previous. Visiting the club in search of a wild night, four initially not-particularly-likeable young friends wind up in the room containing The Bed. It soon becomes apparent that leaving the evil bunk is a really bad idea, and after two members of the group suffer bloody demises, the remaining two are left to formulate a way to avoid similar fates. 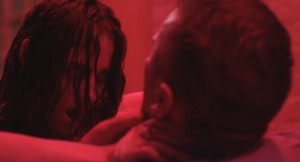 Despite a stony-faced refusal to lighten the mood with any comedic moments, Bed of the Dead is actually a lot of fun. Bizarrely, the quickly established certainty that leaving the bed leads to death makes it all the more delicious each time it happens. As in the Final Destination films, it’s not whether a character will die, but how. And the deaths are enjoyably gory – limbs are twisted; torsos eviscerated – but at least a portion of them are assured from the start; it is elsewhere within the plot that the film harbours its real surprises.

The film’s sense of fun is what allows it to overcome its gaping lapses in logic, chief of which is why the female half of the foursome – Sandy and Nancy – would have agreed to attend the sex club in the first place. It is clearly not their bag, and they seem to have gone against their better judgement for no other reason than to give meathead Ren a birthday treat. Then there’s the calm level-headedness the remaining three talk with following the bloody demise of their friend Fred, as well as the sight of a just-smashed window breaking the parameters of known physics by re-integrating itself into its frame. Such annoyances are ones which seasoned horror fans will be able to get over easily enough however, particularly as the film moves at such a pace.

Building on an already pretty unique premise, Bed of the Dead confounds any expectations of its plot with an interesting, twisty take on the conventions of non-linear storytelling, cutting back and forth between the same room pre and post fire, despite just a couple of hours bridging the two scenarios. And it is when a line of contact forms between Sandy and Virgil that breaks the boundaries of time, and of life and death, that the narrative really starts to show its hand. The mystery deepens, adding a level of intrigue that elevates the film from type of middle-of-the-road horror flick the central performances and often uninspired dialogue could otherwise suggest.

Despite the predominance of the one-room setting, Bed of the Dead keeps itself interesting visually by having two distinct parallel aesthetics. Before the fire, a gothic feel dominates with dark shadows and a lavish baroque enveloping the room’s dark wood interiors. The bed is always the focus; solid and brooding, with the posts and headboard framing shots with a brutal symmetry that ensures its victims are held within, as though already devoured. The straight lines and geometric layout of the furnishings is later replaced by fallen beams and police procedural clutter as Virgil picks through the charred room after the fire; the shadows switched for the harsh white of forensic lights. The visual distinction creates two wholly different moods, making the cuts between the two often quite jarring. 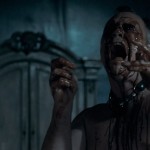 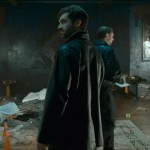 Boasting a pretty nifty central premise and some outstanding photography and shot compositions, Bed of the Dead is an interesting little horror deserving of your time. Given the film’s strengths, it’s all the more frustrating that at least half of the main group of characters are generic and underwritten, making any emotional investment into their respective plights difficult. Perhaps this is a deliberate effort to make their deaths more enjoyable and if so, it works well. The scenes of supernatural violence are inventive and impressively staged and along with the satisfying visuals, hold the interest even when the character interactions do not. Possessed furniture flicks are, it must be said, disappointingly few in number and Bed of the Dead should fare well with festival audiences looking for something fun, gripping and pacey.