Become Something New with this Poster for Evolution

A new poster for Evolution has been unveiled and it focuses on the childish innocence at the film’s core. The drawing of a starfish triggers the film’s descent into beautiful madness, so it’s no surprise to see the poster showing children’s drawings as an important aspect.

Synopsis:
10-year-old Nicolas lives with his mother in a village on a remote island inhabited solely by women and young boys. In a hospital overlooking the ocean, all the boys are subjected to a mysterious medical treatment. Only Nicolas questions what is happening around him. He senses that his mother is lying to him, and is determined to find out what she does with the other women at night, on the beach. What he discovers is the beginning of a nightmare into which he is helplessly drawn. 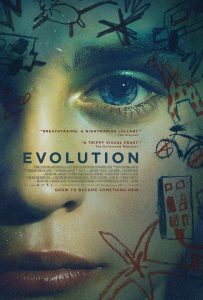 Evolution is one of the most surprising and disturbing horror films I’ve seen this year.  It’s a beautiful and eerie exploration of innocence that is captured with gorgeous visuals that impress and haunt in equal measure. It does well at maintaining its audience’s captivation even when it’s unclear what on earth is going on. It almost relies entirely on suggestion and mystery to ensure you watch until the end and the end is, well, quite unforgettable.

Evolution is out now in the UK, but it hits VOD and limited theatres in the USA on 25th November 2016.