To accompany the announcement that Death Race: Beyond Anarchy will be released on Blu-ray and DVD in January, Universal has put out the first trailer for the film.

The fourth entry in the series that started with 2008’s remake of cult classic Death Race 2000 and the first since 2013’s Death Race: Inferno, Death Race: Beyond Anarchy is promised to be the craziest, bloodiest instalment yet. Going by the trailer, it looks to be taking more than a few cues from Mad Max: Fury Road, too. The film stars Agents of S.H.I.E.L.D.’s Zach McGowan, series regular Frederick Koehler and Christine Marzano (Byzantium), alongside cult heroes Danny Trejo and Danny Glover.

From the press materials:

“Danny Trejo returns as the ruthless bookie, Goldberg, in the wildest, bloodiest, Death Race ever. After a failed attack on inmate and legendary driver, Frankenstein, Black Ops specialist Connor Gibson (McGowan) infiltrates a super-maximum federal prison with one goal – enter the immoral and illegal Death Race and take Frankenstein down. Connor enlists the help of Baltimore Bob (Glover) and Lists (Koehler), and unexpectedly falls in love with bartending beauty, Jane (Marzano). Connor will have to fight for more than his life in this brutal world of no guards, no rules, no track, and no fear.” 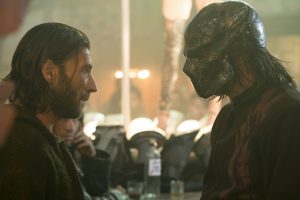 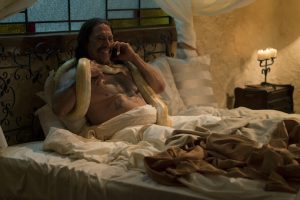 Don Michael Paul (Half Past Dead, Tremors 5: Bloodlines) directed Death Race: Beyond Anarchy, which was written and produced by series creator Paul W.S. Anderson. It arrives, ‘Unrated and Unhinged’ on Blu-ray, DVD, Digital and On Demand on January 30th, along with a four-film Blu-ray boxset of the Death Race series.