From Jonathan Milott and Cary Murnion, the directing duo behind 2014’s Cooties, Becky is now available on digital, VOD, and in select drive-in theatres in the U.S.—and two awesome new posters have arrived to celebrate the release. 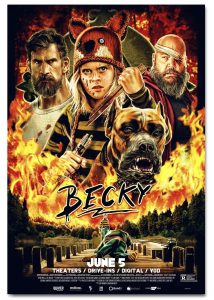 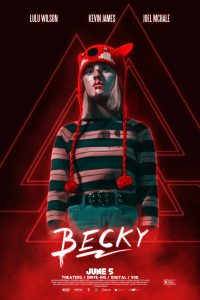 Designed by artists Eddie Holly and Stuart Holroyd, the posters focus on the titular character of Becky (Lulu Wilson), a rebellious 14-year-old girl. After her mother’s death, Becky joins her father for a weekend getaway in an effort to reconnect. But after a group of convicts led by the merciless Dominick (Kevin James) invades the lake house, the trip takes a turn for the worse…

Joel McHale (Deliver Us from Evil) and Amanda Brugel (The Handmaid’s Tale) also star in the film, which was co-written by Nick Morris, Ruckus Skye, and Lane Skye.