Beautiful New Poster for The Beguiled 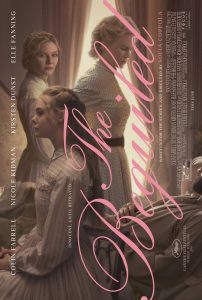 Synopsis:
The story unfolds during the Civil War, at a Southern girls’ boarding school. Its sheltered young women take in an injured enemy soldier. As they provide refuge and tend to his wounds, the house is taken over with sexual tension and dangerous rivalries, and taboos are broken in an unexpected turn of events.

You can also check out the trailer for The Beguiled below, which gives you a tease of the seductive suspense that is set to be unleashed. It looks beautifully atmospheric and boasts equally as exquisite performances, costumes and set design.