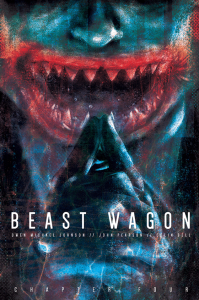 The argument in Beast Wagon, or so it seems to me, is that mankind has lost its connection to nature. We are no longer the hunters or explorers we once were, and the only relationship we have to wild animals is when we see them in zoos or on TV. But somewhere in our collective unconscious, the memories of our former selves can be awakened – usually with a sense of atavistic terror. We feel them when we venture out into the wilderness, or when we see the violence on the news. These primitive urges are aroused time and time again, no matter how much we might wish to repress them. This is the crux of Beast Wagon #4. Here the animal characters are pushed into the background, as Johnson reveals the true nature of the humans in the story – all of which are far more savage and unyielding than the titular beasts.

Issue #3 – released just over four months ago – ended on a particularly gruesome note, with zookeeper Archie killing and eating Sherman, the shamanic turtle. Issue #4, the first to come with a mature rating, is no less violent and disturbing, incorporating elements of racial abuse; trophy killing; and, in the comic’s most shocking panels, even bestiality. Unlike the previous three issues, issue #4 is all about the humans, with Johnson exploring the mad, perverse desires that lie beneath the surface of his characters. Archie, Mildred and Patrick all take centre stage, and, no longer concerned with the effort of fitting in, are transformed into their true selves – difficult, destructive and undoubtedly full of surprises. Although these characters are human, each of them has that certain impossible quality which permeates through Johnson’s other comics, as well as the intensities of observation and imagination that are his trademarks. In issue #4, the tension of the previous issues has finally come to a head, threatening to erupt completely in the final, apocalyptic pages.

I’ve never praised Owen Johnson for his subtlety before, but in issue #4, the nuances of his dialogue make the characters come alive. Mildred’s questioning of whether she feels disgraced or displaced is an interesting moment, particularly from a character who felt relatively one-dimensional at the start of the series. But the best scene in the comic is between Patrick and his girlfriend, who literally transforms before his eyes as he confronts the way he’s treated her. Using words and rhythms that evoke the movements of a spider and a fly, Johnson masterfully tells us everything about their relationship and how destructive it’s been for both of them. In a comic so full of big, explosive sequences, it’s refreshing to see the same attention placed on the character-driven moments.

I’ve always said that John Pearson is an exceptional artist, but in issue #4, Pearson’s work is nothing short of extraordinary. Faces, even those of the people in the background, are shockingly realistic, and the animals are both emphatic and expressive. Pearson’s colours, veering wildly between hot reds and gelid blues, give the book a tense and claustrophobic atmosphere. The effect it produces is that of a tension of the opposites, both sides fighting for dominance before the finale in the next issue. Colin Bell’s letters and design work also deserve a special mention, as both are artfully done in this issue. 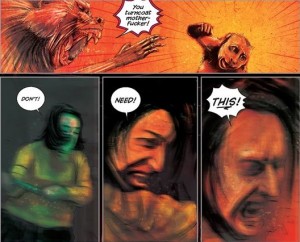 When Beast Wagon was initially released last year, the comic was presented as a piece of social commentary exploring our treatment of animals. But after reading the latest issue, this argument seems both facile and superficial. The heart of the story is far deeper and stranger, forcing us to confront the darkest parts of our very human selves – especially those parts which have been suppressed in order to be loved or understood. Perhaps Johnson wants us to rectify the animals within our own psyches, or else to cast them out entirely. I suppose we won’t know for sure until the final issue is released later this year, but judging from the remarkable standard of the series so far, Beast Wagon promises to be a strange, unnatural animal – as equally beautiful as it is grotesque.