A Beast Lurks in the Poster for Split 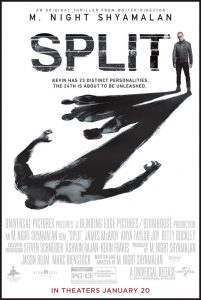 Split is one of our most anticipated horror films of 2017 and there are only a few weeks lefts before it is released. Split comes from director M. Night Shyamalan who proved that he can still make horror films with his effective found-footage thriller The Visit in 2014.  His next film looks like another expectedly trippy feature and follows a man with 23 personalities, with a 24th about to be unleashed.

The man with all the personalities is played by James McAvoy and the story sees him kidnap three young women, played by The Witch’s Anya Taylor-Joy, Recovery Road’s Jessica Sula and The Edge of Seventeen’s Haley Lu Richardson.

Synopsis:
While the mental divisions of those with dissociative identity disorder have long fascinated and eluded science, it is believed that some can also manifest unique physical attributes for each personality, a cognitive and physiological prism within a single being.

Though Kevin (McAvoy) has evidenced 23 personalities to his trusted psychiatrist, Dr. Fletcher (Betty Buckley), there remains one still submerged who is set to materialise and dominate all the others. Compelled to abduct three teenage girls led by the willful, observant Casey (Taylor-Joy), Kevin reaches a war for survival among all of those contained within him—as well as everyone around him—as the walls between his compartments shatter apart.

The footage we’ve seen from Split has been extremely positive and, if anything, we’re certain to get an excellent performance from James McAvoy, because he looks exceedingly creepy. We can’t wait to see McAvoy’s monster unleashed on 20th January 2017 and hope you’re looking forward to it, too.