While the identity of Jack the Ripper has been a source of fierce debate an analysis for over a century, neither police nor true crime buffs have been able to definitively crack the case. The BBC aims to change all that with a new documentary, targeting an air date sometime in late 2018. To that end, they’ve assembled a team comprised of experts for a new documentary hosted by Silent Witness star Emilia Fox.

Also part of BBC’s arsenal: A “virtual operating table”, cutting-edge forensic techniques, and a focus on the slasher’s motivations in addition to his identity. This documentary also seeks to differentiate itself from past explorations of The Ripper by paying attention to his victims and how their lives left them especially vulnerable to the sexual sadist. BBC’s Commissioning Editor Craig Hunter stated:
“Jack the Ripper is synonymous with murder and intrigue – even if you don’t know all the details, you will have heard of the case. It is remarkable to think that today’s scientific techniques can be used to help try and tackle unanswered questions which are more than a century old.”

Jack the Ripper has gained almost legendary status in the decades since his crime spree rocked London’s Whitechaple district in the late 1800s. One of the best fictional works based on his murder spree is From Hell, the graphic novel by Alan Moore and artist Eddie Campbell, and its film adaptation directed by The Hughes Brothers and starring Johnny Depp, Heather Graham, and Ian Holm. Since we don’t have a trailer for the upcoming BBC documentary yet, you can check out the trailer and synopsis for From Hell below. 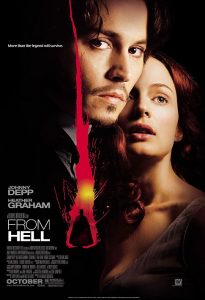 Synopsis:
Inspector Fred Abberline is determined to track down Jack the Ripper in Victorian east London. As well as his Sergeant Peter Godley, Abberline is helped on the case by visions he has while high on opium, and adding urgency to his investigations is `unfortunate’ Mary Kelly, a potential Ripper victim with whom the Inspector is falling in love.