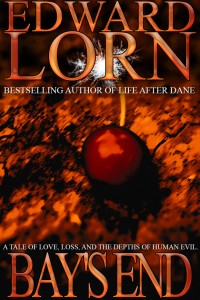 The story, well its kids antics as usual until they come up against Officer Mack and see the ugly side of the law, 4 cherry bombs and a missing girl later, with our young protagonists the last to see her alive and the story just rockets along at a frantic pace, one of those you can’t stop reading, you need to know how it ends.

Told through the eyes of young Trey, it was his friend Eddy that captivated me in way I’ll not forget, with a brash ‘say what you think’ attitude, an attitude that most people wish they could carry off but are usually restrained by circumstance.

I’ve read some of the most renowned ‘coming of age’ stories around, the best are always entwined with a horrific edge, then I read Bay’s End by Edward Lorn and have to say it just blew them out of the water. Left them in a trail of dust.  Whether you want to call Bay’s End a ‘coming of age’ story, a tragedy of childhood, a horrific drama with more than a bit of bite or just an amazing story, that’s up to you, I’ll settle with the last one and I’d go as far as too say it’s one of the best reads I’ve had in a long while.

To the dialogue, a lot based on the authors memories as a kid, it was something I could easily relate to and could imagine actually being part of the conversations and I can’t say that about many book I’ve read in the past.
For example Trey asks Eddy.

“Is your Dad a teacher”?

“Who that fat fuck” is the reply and the stories full of that kind of humour, laying pipe etc. Loved it.

It is not however all humour, there’s a couple of particularly harrowing backdrops to this story and it’s masterfully told with a powerful conclusion. What darkness lies underneath the normal day to day lives of the people you know? Chances are it won’t be as horrific as this.

Edward Lorn writes horror with a healthy dose of humour, his short stories are exceptional and Bays End, his debut novel is available free on kindle and is one that I highly recommended.