Synopsis:
Five strangers harbouring some unusual secrets find themselves brought together at a bed and breakfast in a secluded mountain town. And there’s a killer on the loose…

Directed by Powell Robinson and Patrick Robert Young, the latter of whom also penned the film, Bastard is the story of two hitchhiking newlywed serial killers Hannah and West (played by Ellis Greer and Dan Creed respectively) who violently dispatch of a motorist and help themselves to his convertible, on their way to an isolated town to play a gig with their band (the Royal Cunts). It’s also the story of two young runaways Betty and Jake (Rebekah Kennedy and Will Tranfo) trying to escape an abusive stepfather, though their relationship may be more than meets the eye. It’s ALSO the story of suicidal cop Michael (Burt Culver) struggling with his alcoholism while trying desperately to patch things up with his boyfriend. Oh, and there’s a masked slasher killer running around.

Confused? You should be.

Bastard is a film which tries very hard to be strange, but its attempts at genre-mashing are more often than not jarring and uncomfortable. On paper, the clash of plotlines sounds intriguing and enjoyable, and at least for its first half, it is. With the Natural Born Killers shades of its opening kill and an off-kilter comedic tone, this is a film which knows how to hook its audience from the get go, and seems to delight in subverting our expectations. Our introduction to Michael is especially interesting: with cheerful music playing in the background, we see a close-up of him in drag looking distraught, before he removes the wig and slips a noose around his neck. Combined with the fact that our slasher killer’s first onscreen kill involves a ball-gagged man enjoying a romantic rendezvous with his bare-breasted strap-on wearing girlfriend, I initially believed that Bastard was attempting to atone for the sins of the genre’s past by subverting some of its more sexist and homophobic clichés. Transmisogyny in particular is an egregious sin which classic horror films like Sleepaway Camp and The Silence of the Lambs have arguably been very guilty of, and with a small reference to the latter in Bastard (‘put the lotion in the basket’, Hannah quotes at one point) I was hopeful that the film might be building up to something interesting with Michael’s depressed and potentially gender-dysmorphic character. He was a cop; perhaps he’d be the one to save the day.

To call Bastard’s second half disappointing is an understatement. It’s infuriating. With so much going for it in its first act, the film decides to bring the majority of its plot threads to a grinding halt, before doing a complete U-Turn and descending into generic masked-killer antics. Having sold itself on the idea that all five of our central characters are suspects, the film makes the baffling decision to show that four of them could not possibly be responsible for the first kill we see the masked murderer commit. In fact, the only one it could be is Michael, and that was when the more cynical part of my brain began to suspect that perhaps the film wasn’t trying to be clever or subversive at all in including a gay cross-dressing character – perhaps we were supposed to be distrustful of him all along because of his ‘deviant’ behaviour. I couldn’t say for sure, and I don’t want to label it offensive when the whole thing was so muddled that I have no idea what tone they were going for. Either way, his character is unceremoniously dispatched of far too soon, rendering the whole thing pointless.

In fact, that can be said for most of the subplots and characters, because Bastard cannot wait to stab and slash its way through everything interesting it sets up in order to get to the not-so-shocking reveal of its slasher killer and their motives. After the comedic tone of much of the first half, it decides it wants to be gritty and extreme for the finale, and unfortunately the end result is not just wildly tonally inconsistent, but tone deaf. Once you’ve shown us a slow-motion dildo fight while Ave Maria plays, you can’t expect your audience to swallow a horrible and mean-spirited incest and abuse plot without feeling a little sick, and not in the way the directors probably intended. It clearly wants to shock you, but the real shock is how jumbled and jarring the whole thing comes across as. 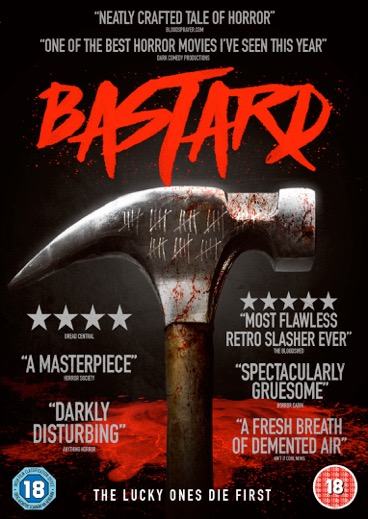 There are certainly elements to be admired in Bastard. The actors are mostly fantastic, though many aren’t given nearly enough to do. The gore is truly impressive given the low budget – in particular, a nice spine removal and an eye-bulging hammer to the head look great. But this is a rare case where removing the biggest element of the plot would have made for a better film. The slasher killer aspect is the weakest part of Bastard by a long shot, and the film nosedives into mediocrity as soon as it is introduced. Carving that rotten chunk out of the script and replacing it with a deeper exploration into our five interesting main characters and their secrets could have been very satisfying.

I’d recommend watching it once, because its first half is a lot of fun. But this isn’t one that stands up to multiple viewings. The last act is a real bastard to sit through…