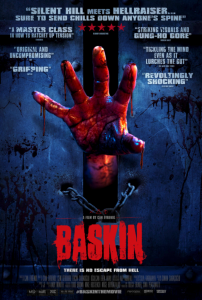 You’ll no doubt have heard everything you need to hear about Baskin by now, although here in the UK we’ve been waiting a long time for a proper release of Can Evrenol’s breakout festival hit. With the slick Turkish gorefest finally hitting VOD and selected British cinemas on Friday, this new poster has arrived to promote the release.

Baskin played exceptionally well on the festival circuit last year, stopping off at the Toronto International Film Festival, Sitges and Austin’s Fantastic Fest, as well as playing the Glasgow leg of Frightfest in February of this year. It has since seen a release in North America and various European countries, garnering almost universally positive reviews as it goes.

You can see Vertigo Films’ UK trailer for Baskin below.