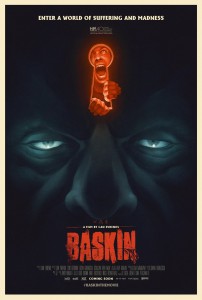 A squad of unsuspecting cops goes through a trapdoor to Hell when they stumble upon a Black Mass in an abandoned building.

Can Evrenol’s horror Baskin comes with a fierce reputation. Promising to be one of the most bizarre and gore-soaked horrors to grace our screens in quite some time, Baskin is every bit the nightmare that I thought it would be. It’s a balls-out macabre tale about a squad of foul-mouthed cops who led into the mouth of hell and it rarely lets up momentum.

Through the buckets of blood director Can Evrenol demonstrates an undeniable flair for style. Bathing his scenes in giallo like shades of red, yellows and greens, every shot of Baskin is well constructed and it makes a stunning feature debut for the Israeli filmmaker. As director Evrenol has delivered a film that takes time to build a steady sense of dread in his audience before turning their world upside down unleashing wave after wave of unrelenting horror. 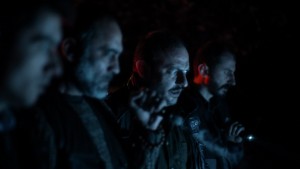 Speaking of horror, with  wincing eye trauma, sexual undertones, bizarre and potentially offensive visuals, Baskin unashamedly pushes the boundaries and challenges the audience’s sense of acceptability both audibly and visually. So those of a sensitive disposition should most certainly look elsewhere but those of you looking for a horror with intensity, Baskin becomes an intense ride packed with many unnerving torture sequences that are not so easily forgotten.

The narrative structure of the piece is just as unforgettable too. Baskin weaves dream sequences and broken timelines which will certainly appeal to some but it will no doubt alienate others along the way. I wouldn’t worry tho as the film truly shines in it’s final act. Without spoiling too much, audiences are shown a ceremony which is deeply unsettling. Here Mehmet Cerrahoglu’s performance as Father is a mishmash of goofieness and strange but what he does in the act is just incredibly devastating to watch.

As for the rest of the cast they do a stellar job to keep the film ticking along nicely during the more quieter parts of the film. Their reactions are realistic and at times go just the right amount of over the top to make the film that more incredible in its execution. Even the extras are just as noteworthy. There has been lots of thought put into each one that you see on screen from the frog hunters to the victims/perpetrators inside the hellmouth every character seemingly comes with their own sense of personality and it screams like a banshee on screen.

Overall, it is true that Baskin is creative and the work done in front of and behind the camera is very admirable but there is something about the film that didn’t quite make the experience wholly solid. The film raises more questions than it answers and this somewhat frustrated me because there was so much going on under the surface. Far too much is teased but never investigated. I imagine plenty of other viewers won’t mind this but for me it was just frustrating if not ultimately disappointing.