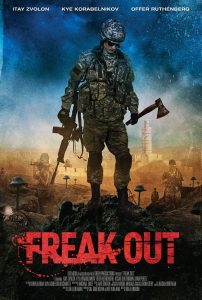 We know that slashers love to torment victims at summer camps, but this Israeli slasher film shows a killer lurking around an army base camp. During a week of patrolling in a remote base, a soldier in the IDF is tormented by his fellow soldiers. But, when they begin to get slowly killed off as strange things occur around them, they all become the victim of someone’s sadistic killing spree.

The trailer is a bit odd as it aims to blur the genre boundaries between horror and comedy. Instead of showing a seamless manoeuvre from its comedy beginning into its slasher finale, the trailer’s poor editing makes it all seem a bit choppy and uneven.

Despite the problematic trailer we’re intrigued by the concept. The cast, setting and production design actually look pretty great, so we’re excited to see the film when it gets a release in the UK and USA.