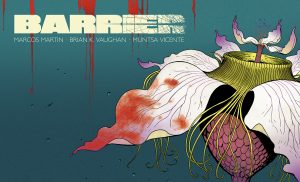 Much like the world of music and movies, comic books have their own superstars, and Brian K. Vaughan is currently the king of comics. With a repertoire of genre-busting works such as Saga, Y: The Last Man, Paper Girls, Runaways, and others, he’s got the Midas touch of quality and intrigue. He’s basically what Neil Gaiman was in the height of his Sandman days: a man that can bring in readers who have never touched a comic in their lives and it seems like he’s far from slowing down. His newest work Barrier, originally debuting PanelSyndicate.com, is finally seeing a print-release every week of May (which at the time of writing is well into its third issue), and delivers more of that sweet Vaughan goodness that we have all come to love. The story focuses on a the split lives of two people on opposite sides of the Mexican border and how one event unexplainable event brings these two together in ways never imagined before. A classic tale with a sci-fi twist, Barrier fights prejudice with the only thing we all have in common, that we are all human.

Barrier shares space with two central characters, Liddy, a serious woman who spends her time protecting her home from drug traffickers from the South while fighting her inner demons, and Oscar, a refugee from Honduras who is traveling his way North and barely speaks a lick of English. One day, while patrolling her land, Liddy finds one of her horses dead and skinned. Fearing it’s a warning from a drug gang, Liddy decides to up her patrol by interviewing some mercenaries, but quickly backs out in favor of her own brand of justice. Oscar, on the other hand, spends his time fighting tooth-and-nail up the southern territories only to meet one obstacle after another. When he finally does reach his destination, there seems to be one more object in his way, something that neither he nor his human blockade have ever dealt with.

Though Barrier’s biggest selling point is the sci-fi angle (which you’ll have to read to find out), at its heart, the story is about human connection. The pages are filled with Liddy’s and Oscar’s shared reality, one of violence and endurance, where the dream of finding a happy life is marred with resistance from both with good and ill intentions. Even though they exist at opposite end of the spectrum and are even seen as enemies, they share a common goal that unfortunately requires them to get through each other to achieve. Vaughan even takes it one step further and puts all of Oscar’s interactions in Spanish, filling pages with words that (for some readers) require visual cues for the story to be understandable. Of course, there’s always the option of Google translate or asking you’re dual language friends to help translate, but Vaughan manages to move the story along without requiring a full understanding of Oscar’s language, which only furthers his point that we all share similar struggles even if we can’t speak the same language. 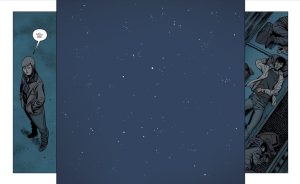 Granted, it’s not just Vaughan names on the work that helps it stand out, but the accompanying art by Marcos Martin, who had previously collaborated with Vaughan on the sci-fi/detective comic The Private Eye. Martin’s art can only be described as encompassing. With Barriers landscape page layout, his work fills up every corner with an encompassing view of the world that the characters live in. The blue and pinks of the sky run high into the horizon, the streets of the small Texas town lay low along the flat plains of the desert, and as the two characters slowly approach them, the literal panel spaces between them get smaller and smaller. This is a man who knows how to use the comic medium to its full potential and says just as much in his used space as he does in the empty space. It’s a truly cinematic experience and moves as if it was handled by a prominent director. Definitely not one to be missed out.

Be sure to grab the print issues as they come out or, if you’re the impatient type, the entire series is up on PanelSyndicate.com.