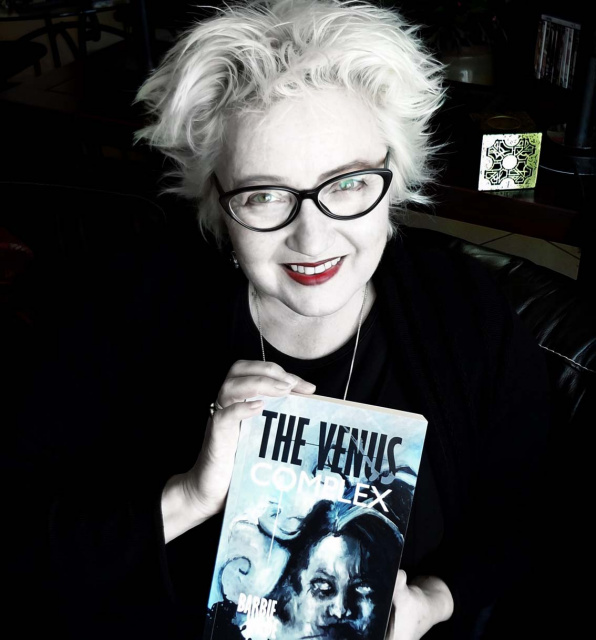 A man rises out of an abyss of frustration and rage and creates works of art out of destruction, goddesses out of mere dental hygienists and beauty out of death. It’s also about the sickness and obsession that is LOVE.   Enter into Michael’s world through the pages of his personal journal, where every diseased thought, disturbing dream, politically incorrect rant and sexually explicit murder highlights his journey from zero to psycho.Back in 2009 I interviewed Barbie Wilde when she was looking for a publisher for her first full length novel The Venus Complex; not always easy when your novel deals with the violent sexual fantasies and vile acts of a serial killer who preys on women. At the time Barbie’s short story Sister Cilice had just been published in the Hellraiser anthologyHellbound Hearts. It was a perfectly pitched addition Hellraiser mythos – as well it should be – Barbie played the Female Cenobite in Hellraiser 2. Sister Cilice is an intoxicating blend of sex and violence that creates a story of perverse beauty, and is one of the highlights of Hellbound Hearts. The Venus Complex too deals with sex and violence, but being a story very much grounded in the real world, as opposed to Clive Barker’s fantasy one, it was proving to be a tougher sell.

In 2009 Barbie said:
“There can be drawbacks to writing a book about a serial killer in the first person. All the other characters get filtered through his perceptions and that makes people uncomfortable. They want a hero or heroine to root for, and all they have in my book is Michael and his twisted mind. Some people dislike him, but I think he’s funny and charming in his own distorted way, although obviously he has “issues” and leaving a trial of dead girls in his wake isn’t everyone’s cup of tea.”

Indeed – but it is my cup of tea, and my curiosity about The Venus Complex remained. Thankfully Barbie’s perseverance paid off, and now The Venus Complex has been published by Comet Press.The story deals with Michael, a fairly average man in most regards, until a life changing event sends him down a path of deadly sexual depravity. Using women as a canvas for his dark fantasies, the building blocks of a fully fledged serial killer begin to fall into place.

Book stores are bursting at the seams with serial killer novels, but despite this The Venus Complex’unique perspective allows it to confidently hold its own in an overcrowded genre. Written as a journal penned by Michael, an obvious novel for comparison is Brett Easton Ellis’ American Psycho. What better company to be in? But The Venus Complex is no American Psychoclone, and Barbie Wilde has her own ways of making your skin crawl.

As a man, what surprises me most about The Venus Complex is how deftly Barbie Wilde seems to be able to write from a male perspective. Has someone been telling her our secrets?! Uncomfortable as the book is at times because of its graphic depictions of sex and violence, I couldn’t help but wonder whether there’s an extra level of discomfort because a female writer seems to have tapped into what makes men tick so expertly. Now don’t get me wrong, I’m not saying all men are serial killers or that all men have twisted sexual fantasies, but the whole range of male sexual desire is depicted here as Michael’s transformation progresses, and I defy any male reader to not recognise some aspects of their own sexuality somewhere along the scale. To her credit Barbie Wilde doesn’t approach the material as a judge or critic of men, in fact as she said in 2009 she seems to find Michael rather charming, but to have a woman present the male mind so convincingly is unnerving to say the least!

Although her short story Sister Cilice was firmly in the realms of fantasy, Barbie shows an equal talent for the more grounded world of crime and investigation. There’s a reality to the procedural aspect of the novel that’s refreshing when compared to the depictions of cops that we usually see on television or in the movies. It’s difficult to describe without delving too far into spoiler territory, however I’d wager the frustrations of criminal investigation as depicted in The Venus Complex are closer to the truth than the super-cops with unlimited resources that pull clues out of thin air on television each week.

The Venus Complex is a compelling read and Barbie Wilde’s confidence in the material shines – there are no first novel nerves here. Through her expertly controlled pacing, Michael’s journey from nobody to serial killer is both believable and frightening. By allowing us to see aspects of ourselves in Michael, Barbie also shows us that his extreme fantasies may only be a couple of steps removed from our own, and that’s the most frightening thing of all.