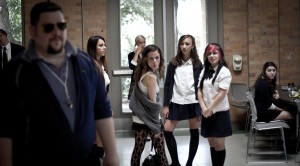 Synopsis:
A dark and stormy Saturday afternoon in Crestview Academy and six kids find themselves stuck in an 8 hour detention. As they impatiently serve their time, each of the detainees meets a heinous end. Is it an outcast student hell-bent on revenge or are the ghosts of the school seeking some supernatural retribution?

BAD KIDS GO TO HELL originally made its bow in the middle of 2009 when it debuted as a four issue comic mini-series from Antarctic Press. It was quite the hit with every issue selling out in the first week and the trade paperback following suit. Co-creator Matthew Spradlin had initially intended to pitch it as a feature film as early as 2006, but due to the writers’ strike, studios were less than forthcoming with regards to accepting scripts. Fast forward to 2012 and taking the directorial reins himself, Spradlin finally got his way with the movie debuting at cinemas across America.

Pitched as a mix of The Breakfast Club and The Grudge, the appearance of Judd Nelson as the irascible Headmaster Nash will no doubt do little to suppress such influences – not to mention some tip of the hat dialogue – but on the whole BAD KIDS GO TO HELL does manage to be laced with elements of originality despite some predictable characters with the ubiquitous geek, jock, goth etc.

An ambitious mash-up of horror and comedy, Spradlin’s feature struggles to blend the two, and while much of the horror sequences are seamlessly constructed, the comedy aspect feels disjointed and interferes with the flow of the picture. The fusion of both genres when it’s done well (TUCKER AND DALE vs. EVIL) is a delight, but here there’s a jarring discordance as it segues into slapstick occasionally which seems ill-fitting and poorly judged.

This is an ambitious film where the creative team of Spradlin and Barry Wernick seem hell-bent on shoe-horning in as much as the running time will allow, all of which leads to a little bit of a mess. It’s a simple revenge-orientated narrative, yet with continual flashbacks to flesh out the background of so many characters it becomes needlessly muddled and frustratingly bogged down with its own elaborate exposition. You can’t help but watch BAD KIDS GO TO HELL and claw away at the edge of your sofa in frustration at the genre-bending genius of the movie that lies within, but sadly this just gets swamped in a sea of naivety for first time director Spradlin. Perhaps an old-hand behind the camera may have led to a leaner, meaner project, but as it is you’re left applauding its intentions yet shaking your head at its failings. 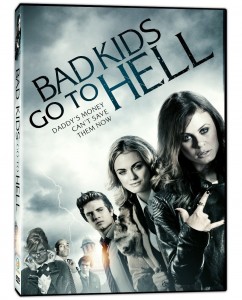