Synopsis:
Jamie lives in the mostly quiet seaside town of Hemsby. Not much for a fifteen-year-old to do during the summer other than spend the days in the local arcade playing video games. Jamie likes a particular type of game though. He is a retro expert and is close to completing every single level on Pac Man in one sitting!

Scottie runs the arcade and has a soft spot for Jamie and helps him out with his problem with bullies.

When Scottie takes delivery of a new game, dealing with bullies for Jamie is going to be a walk in the park compared to what is coming.

The game proves to be a huge hit with the kids even though no one can understand it. There is evil at work though, and what happens next turns Hemsby from a quite seaside town into a town of unknown horrors and bloodshed.

OK, straight to it. Characters. Jamie and Scottie are the main ones. Jamie is a typical fifteen-year-old. He is quiet in one sense but not so in another. He is an all-round decent lad but can still get himself into bother now and again. Scottie is a man with more than one problem and a past he would rather not talk about. He likes the booze but doesn’t turn into a nasty person with it. He just wants to work, drink, sleep. Put them together and there is a definite connection that is quite endearing. Other people that would play main roles would be Liza, a girl visiting Hemsby that has caught Jamie’s eye. Barry, a quite unassuming lad that is going to explode onto the scene. Angela, the local barmaid with more to offer than she believes herself.

Then we have a host of other kids that all come to the fore as the story progresses and the evil breaks out.

The most stand out thing about every single character in this book is that they could be you. They could be the boy or girl next door or the man or woman down the street. They are so natural that they do not read as made up characters in a book. It’s almost like this is a biography of real people going through real stuff.

The plot? This is where my comparison with Richard Laymon comes in. This has that distinct 80’s feel to it. That easy to read style that Laymon was so good at in all his tales set in America. The fact that Mr Millard has so successfully transferred this style to a small seaside town in England, to me, is superbly fantastic. I don’t think I have read anyone else recently who has managed to do that. It’s sort of B movie style but on a big budget if that makes sense.

Given the title there is no doubt that the story centres around the game. The Bad Game. I am telling no more though about what happens or how it happens. When it does though, this story kicks off in the biggest possible style. It is two hundred miles an hour with blood and guts and flying eyeballs galore. But it isn’t over exaggerated. If it was a movie there wouldn’t be huge, slow motion explosions and lots of CGI used in the death scenes to make it look as gruesome as possible. It’s just told in a way that gets the point across with no frills but still gives you the huge effect and makes you cringe all the same.

Adam Millard has a writing style that I fell in love with after about ten percent of this story. People talk about the words flowing across the page. These words don’t flow across the page. It’s more like the laziest day you could ever think of, lying on an inflatable bed on a swimming pool with your eyes closed, feeling the sun beat down on you as you just gently float along. Not a care in the world and giving you the most wonderful settled feeling. But then when it needs to kick off it does it at a speed, and ferocity, that would be like one of your damn kids jumping in the pool and knocking you flying off the inflatable, sinking and gasping for breath. The run to the finale will leave you floundering in the water for ages until you finally drag yourself to the edge of the pool and catch your breath. 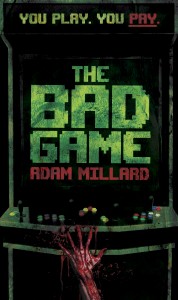 His characters are superb. His story is superb. The idea behind the story will have every person who loves horror of old smiling from ear to ear while reading this and for hours after finishing it. It’s horror that is frightening and sickening but at the same time horror that is fun to read and the sort of story that, when you finish it, you feel deflated, because you wanted it to be much much longer. But then you smile again because it was so much damn fun.

To summarise: Just read the above and buy it. Or if you come to the end first, don’t bother reading the above, just buy it.