Synopsis:
Amelia, a single mother plagued by the violent death of her husband, battles with her son’s fear of a monster lurking in the house, but soon discovers a sinister presence all around her.

The problem with the horror genre nowadays is that it is saturated with films which employ an abundance of jump scares and over the top gruesome special effects. As a result, the horror genre has become predictable and feels somewhat repetitive. But when the ferocious trailer for Jennifer Kent’s THE BABADOOK made its debut horror it seemed that horror fans couldn’t wait to see it. But is it the film that modern horror fans was expecting it to be?

From the outset it is clear that The Babadook is not your average horror film. For starters it has a stark difference in tone to the trailer. This has no doubt ruffled the feathers of audiences who were expecting to see another rendition of Insidious, The Conjuring etc. So where the word-of-mouth from those wanting something more might discourage people from watching, I am here to tell you that you shouldn’t listen to them. The Babadook is a gripping horror film that truly raises the bar for modern horror.

As director Jennifer Kent takes her audience on a deeply disturbing journey that does not play to the conventions of the modern horror film. There are no cheap or fake scares at regular intervals, the tone of the film is incredibly dark but the horror is much more subtle. So instead of being hand-fed a standard horror-by-numbers the end result here is a film which is a satisfying and deeply frightening psychological horror that works on multiple levels.

On one hand it is a monster movie and on the other it is a much deeper film that explores concepts of grief and loss. One of the key strengths of The Babadook can be found with the way it connects with its audience.

It draws you in with a heartfelt story which is anchored by a terrific oscar worthy performance from actress Essie Davis. She plays the role of Amelia with such grace and pain that her performance is literally heartbreaking to watch. She is joined by Noah Wiseman. He who plays her son Samuel and despite his young age, he does a wonderful job and deserves the praise for the standard of his performance.

Other aspects of the film are equally as good. Under Kent’s direction, the cinematography by Radoslaw Ladczuk is superb. It obscures just enough of the monster to keep an air of mystery. So combined with effective sound design and creative editing techniques, there is no denying just how technically effective The Babadook is when developing a sense of unease in its audience. I only hope that other filmmakers follow suit.

Extras include:
“They Call Him Mister Babadook: The Making of The Babadook”, Featurettes, “Monster” Short Film, Trailers, Photo Galleries 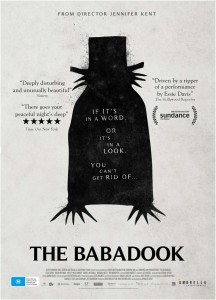