The award-winning modern giallo Francesca will be getting a DVD release courtesy of MVD Entertainment and Unearthed Films this September. The film comes from directors Luciano and Nicolas Onetti (Sonno). 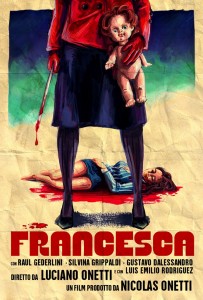 Francesca has already been a hit at various film festivals, winning the director brothers the Best Director award at Buenos Aires Rojo Sangre 2015 and Best Production Design at the Tabloid Witch Awards. You can check out the film’s seductive and violent trailer below.

Synopsis:
It’s been 15 years since the disappearance of little Francesca, daughter of the renowned poet and playwright, Vittorio Visconti. The community is stalked by a psychopath bent on cleaning the city of “impure and damned souls”. Moretti and Succo are the detectives in charge of finding the killer of these “Dantesque” crimes. Francesca has returned, but she is not the same girl they once knew.

Francesca will be released on 27th September and you can catch it at the Horror Channel FrightFest on Friday 26th August on Discovery Screen 2.