Synopsis:
A coroner and his son are trapped in a morgue shortly after the arrival of a woman’s corpse. They name her Jane Doe as she is without an identity and it is up to them to get to the bottom of the cause of her death. When strange things start happening, they believe she may be the cause.

The Autopsy of Jane Doe begins like a gruesome opening of an episode of CSI, where a police force struggle to figure out the events that lead to the murder of a family. With no sign of a break-in they determine that the family were fighting to leave the house, but how does that make any sense? An immediate air of mystery is crafted as soon as this revelation is brought to light, shifting the film from the natural into the supernatural. It’s a short and sweet introduction that ends with the discovery of a woman’s body in the basement. She’s lit up like an angel, with godly lighting appearing to exude from her unnaturally pale skin. We know too well that this presentation of her is an ironic inaccuracy, because she’s probably crawled her way up from hell, not heaven.

The best way to describe The Autopsy of Jane Doe is as an entertaining ride through a nightmare with damn good company. As the father and son coroner team, Emile Hirsch and Brian Cox are a dream team. Their chemistry is contagious and if it wasn’t for the corpses, unexplainable events and general horror of their situation, you’d wish you were down there with them. As the events escalate and become increasingly terrifying, they offer frequent welcome breaks with their witty lines and humorous deliverance of dialogue. There is an unmissable understanding and awareness of the horror genre within this script and the characterisation that prevents The Autopsy of Jane Doe from sinking into stupidity. The pair don’t make ridiculous decisions and as soon as things get weird, they plan to get out of there. As the pair dissect the body of Jane Doe, director Andre Ovredal tears apart the horror genre, proving that your characters can be smart and still manage to be subject to scary circumstances. The writing is sharp, intelligent and never takes itself too seriously; choosing to have fun as well frights sewn into the film’s narrative and it is tremendously entertaining. There are few clunky lines of unnecessary dialogue that the film could have done without, but overall, the script is slick and simple, benefiting from its lack of over-complication and eventual satisfying explanation for the strange goings-on.

For all its moments of light-hearted comedy, The Autopsy of Jane Doe has plenty of chills to ensure its audience never gets too settled. The back and forth between humour and hysteria is eventually abandoned for moments that are honestly terrifying. The underground space of the morgue and its narrow, lengthy corridors is used perfectly to emphasise feelings of claustrophobia and hopelessness. There are heart-racing scenes of tension where the eye-opening score will kick in to remind us we’re watching a horror film that is certainly not easy on the horrors. A morgue is an immediately terrifying setting and the idea of corpses walking around will send shivers before you even see it happening. The film plays on these initial preconceptions and anxieties by showing very little and allowing its audience to conjure up the images in their own minds, because what we can imagine is sometimes 10x more terrifying. The frequent shots to Jane Doe’s face and her glassy, wide eyes gets increasingly scary, because we’re waiting for her to blink or smile or wink or move her head or something, surely? That’s what horror films do, right? Ovredal’s awareness of the audience and their feelings is wonderful, because he toys with us and keeps us on our toes, tricking us into thinking we can predict when the scares are going to occur. Sometimes they are easy to predict; the film is not without its classic Hollywood jump scares, but there is an additional petrifying playfulness present that makes for something even more satisfying and even more scary.

It is certain that The Autopsy of Jane Doe is a culmination of great ideas, but does it deliver at the end? It’s easy for a film to fall apart as it goes on or choose to offer a finale that’s not without its flaws. However, what we have here is mighty impressive.  The film effectively slots the pieces of its puzzle into place, offering a reasoning behind the supernatural activity that feels refreshing and, despite its obvious groundings in bizarre mythology, you will accept. Sure, the revelation won’t send shock waves through your brain or have you believing that this is a horror game-changer, but it is an appropriate and intriguing answer to the madness that has been ensuing. The veil of mystery that has been draped over our eyes is lifted, but don’t expect to leave the film without a few questions. 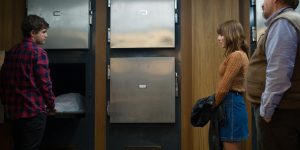 The Autopsy of Jane Doe is a perfect example of intelligent, effective and simple horror film-making. It’s tight construction and clear direction is a joy for audiences that desire a chilling, slick and entertaining 99 minutes of terror.