The Australian Poster for Raw is Torn by Flesh

Raw is gearing up for its theatrical release in Australia and New Zealand, so a striking new poster has been unveiled to celebrate the fact. The image at the centre is one we’ve seen before, but still holds the same shock and subtle disgust in this new poster. We love the tag line under the image “Sisters – Bound By Love. Torn By Flesh”, as it hones in on the film’s concern with cannibalism, but also, the film’s central relationship between the sisters. 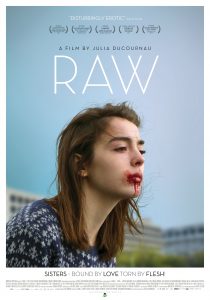 Synopsis:
Raw tells the story of Justine (Garance Marillier), a brilliant 16-year-old whose admission to a prestigious veterinary school sparks a coming-of-age like no other. While her sister Alexia watches on, Justine partakes in a bizarre hazing ritual where she is forced to eat raw meat for the first time, defying her vegan upbringing and unleashing an insatiable desire for flesh.

Raw is certainly not the exuberantly disturbing film some people will lust after, but it is a disturbing and frequently funny coming-of-age tale with a hearty appetite. It’s a must-see for horror fans and features a career-making performance from Garance Marillier, but if you’re after something as cruel and cold as A Serbian Film or even The Human Centipede, you may be surprised at how tame Raw really is.

Check out our review for the film here and if you’re in Australia or New Zealand, do check out Raw when it is released on 20th March 2017.