Australia Gets Lucky with an Ultimate Collection of The Fly 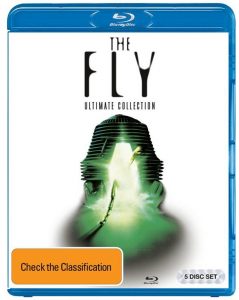 If you’ve been dying to get your hands on a complete collection of The Fly franchise, then look no further. Readers in Australia will be glad to know that Via Vision are handling the release of The Fly: The Ultimate Collection, which will include the 1958 The Fly, Return of The Fly, Curse of The Fly and Cronenberg’s 1986 body-shocker The Fly and its sequel The Fly II.

Not only will the collection feature the entire set of films, but a heap of extras too. The documentary Fear of the Flesh, deleted scenes, audio commentaries, alternate endings and a bunch of more special features will be included in this great set.

This epic collection of The Fly films will be available from 8th March, so start saving.