Author William Gibson, who pioneered the cyberpunk sub-genre of science fiction literature, was one of several authors to pen a script for the third movie in the Alien franchise. But out of all the unmade scripts, Gibson’s Alien III has had the most enduring legacy, achieving cult status after it was leaked online.

We recently saw it in comic form thanks to Dark Horse Comics. Now the story is being turned into a multicast audio drama courtesy of Audible—with Michael Biehn reprising his role as Corporal Hicks.

Following the events of Aliens, the story begins on board the Sulaco where the film’s few survivors—Ripley, Newt, Hicks, and Bishop—sleep soundly in their chilly cryogenic chambers. That is, until an alarm bell warns them that they are not alone… 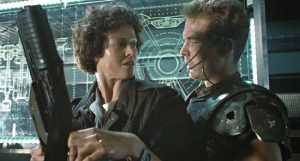 Gibson’s script is a dark and claustrophobic story more akin to the tone of the first Alien movie than what we eventually got with Alien3, and it should make for terrifying, immersive listening. The audio drama adaptation will be directed by Dirk Maggs, who was behind three series of BBC Radio 4’s The Hitchhiker’s Guide to the Galaxy, and is expected to be released on May 30th.