Fans of the Tremors franchise were mystified last year when Syfy abruptly pulled the plug on its planned Tremors TV series. The premise sounded fantastic: set 25 years after the Graboids first rampaged through Perfection, Valentine McKee (played once again by Kevin Bacon)—now a washed-up, delusional drunk pining after his glory days—becomes convinced that the creatures are about to return. Visionary director Vincenzo Natali (Cube, Hannibal) directed the pilot, with Andrew Miller writing and executive producing and… For whatever reason, Syfy said no. And that was that.

It’s unclear whether Natali’s full pilot will ever see the light of day, but a selection of clips will be screened at this year’s ATX Television Festival. And Kevin Bacon will be in attendance, along with fellow cast members Toks Olagundoye, P.J. Byrne, Emily Tremaine, and Haley Tju. 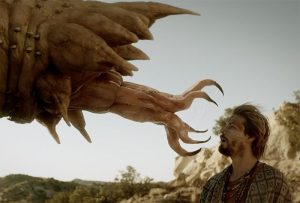 Executive producers Miller and Jessica Rhoades round out the panel, which will include a live script reading and discussion of the project. While we probably won’t get any definitive answers about why Syfy shunned the show (Natali has stated in interviews that he himself doesn’t really know), this may bring us one step closer to finally seeing the pilot in full. Fingers (or mandibles) crossed.