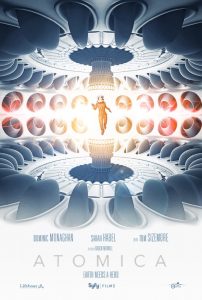 Science-fiction thriller Atomica looks rather good, with impressive set designs of a futuristic nuclear power plant and CGI spacecraft. It lacks, however, in the important areas of story, characters, and performances.

Abby Dixon (Sarah Habel) is a young, gung-ho, by-the-numbers safety inspector for a corporation that has found a way to convert leaked radiation to reusable energy at power plants that suffered meltdowns. Communications go offline at one of these plants, and she volunteers to go there on Christmas Day and investigate. She finds only one of the two plant caretakers there, a seemingly socially awkward man named Robinson Scott (Dominic Monaghan) who knows neither when to shut up nor when to stop strumming his guitar. Missing is Dr. Zek (Tom Sizemore), who Scott doesn’t seem overly concerned about.

Atomica probably could have made an interesting short film; as it is, the Syfy production feels padded out to its 81-minute running time. Most of this excess time is spent listening to Scott ramble, and Monaghan’s performance is neither strong nor charming enough to make that time interesting. Actually, it often borders on annoying. The Scott character isn’t written well, which doesn’t help when the character delivers the majority of the film’s dialogue.

Dixon isn’t there to talk, as she bluntly tells the motor-mouthed Scott. She catches him leering at her twice, once while she is showering and another time while she is tanning. She indeed doesn’t talk, in this case, choosing to not confront him strongly about his voyeurism;  the stakes don’t feel like they are raised very high in the film because of this and other sequences.

Dr. Zek provides basically an extended cameo for Sizemore, who spends the majority of time on a hospital bed. The character is there to complicate matters and make viewers question our allegiances — though most viewers might not be that invested by this point in the film. Dixon must decide which of the two men to trust if she is to get out of the plant alive, but the screenplay starts throwing multiple twists in the third act that feel more contrived than deserved.

The futuristic uniforms consist of overalls for the male characters and a catsuit and glorified motorcycle helmet for Dixon. Syfy definitely stuck to its low-budget approach with Atomica, but as I mentioned before, there are some interesting visuals at play. The interior sets of the plant are gloomy and foreboding, and the action outside of the plants looks rather nice for a low-budget affair.

Director Dagen Merrill holds things together well with solid framing choices and some sequences that stand out. He is hampered, however, by a bloated screenplay from Kevin Burke, Federico Fernandez-Armesto, and  Adam Gyngell. 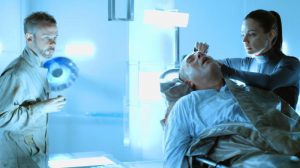 Atomica isn’t bad; it just commits the crimes of overstaying its welcome and attempting to fluff out its running time with too much dialogue from an unlikeable character. It is worth a watch for Habel’s performance, Merrill’s job at the helm, and Timothy A. Burton’s cinematography. Fans of nuclear nihilism science fiction should find it an agreeable viewing experience.