Synopsis:
In this psychedelic mind-boggler, an oddly-dressed creature stalks his human prey, but what is real and what is imaginary? 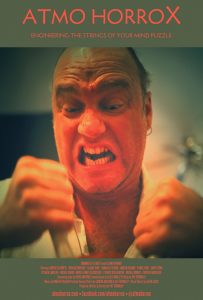 My above interpretation of the film’s events may be hugely incorrect, because honestly, I have no idea what I’ve just watched. However, I do know that I enjoyed the hell out of it. To describe Atmo HorroX as the weirdest and most bizarre film I’ve ever seen would be an understatement, because this is 101 minutes of truly baffling and apparently nonsensical incidents that make very little sense on an assumed level, but culminate surprisingly well to create a quite mesmerising cinematic achievement. It’s a nutty ride, but if you stick with it you’ll be left feeling somewhat satisfied by the almost coherent climax. I say almost, because I am still uncertain if the film offers an ending that deems the events intelligible or if I’m just imagining it. If you’re after the weirdest films of all time then stick this at the top of your watch list, because I doubt you’ll find anything stranger.

Within the first 60 seconds of Atmo HorrorX you’ll be sure of what you’ve let yourself into. A man wakes up in the forest and beats an alien creature to a bubbling pulp, until an Alien-esque snake thing emerges from its face and squeals bloody murder. What the hell is happening? Simply, we don’t know and we aren’t meant to know. Alert: this is not a film; this is a psychedelic, frenzied journey through a world that makes very little sense. Barely a word of dialogue is spoken throughout the entire runtime and the actions of the film are left to speak for themselves. What are these actions saying? I’m not entirely sure. There is a man dressed in tights with balloons tied to his crotch, a mystical being shrouded in smoke that seems to live in the forest, the disappearance of random objects like shoes, lots of sausages and a ton of ear-piercing indecipherable shouting. It’s a blast that earns Atmo HorroX the title of the most Marmite-y film to grace the screen; you’re going to love this or hate it. 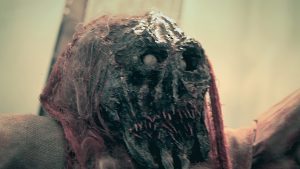 Admittedly, it took me a while to get on-board with Atmo HorroX, because it’s lack of explanation and slow-burning blend of bizarre horror was, at first, horrendously frustrating. Observing a man watching TV almost in the nude, with remote controls strapped to his waist and wearing tights over his head is not my usual source of entertainment. Alas, after about 30 minutes I threw out all my understandings of reality and what I deem enjoyable, strapped myself in and committed myself to getting through this intangible nightmare with a smile on my face. And I am glad that I did. The sound design and score are uncomfortable, unsettling and annoying, heightening the insanity and securing Atmo HorroX’s place as one of the most difficult viewing experiences I’ve had, but there is something to admire in its refusal to commit to what is typically expected from horror films – or films in general – and its brazen nonplussed attitude. The entire film feels like an LCD-infused trip into insanity which is harsh in every sense; from the dizzying camera angles to the harsh editing and eye-melting visual style, this is a film overflowing with the desire to assault your senses in the worst –or the best? – way possible. 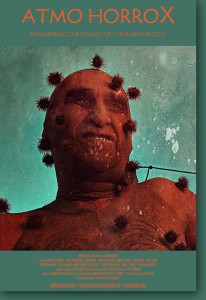 This doesn’t strive to be an easy, enjoyable or cordial watch. It wants to get under your skin and stay there, probing your brain until you can think no more. It’s a conflicting watch with many inconsistencies; you get the idea that this will – hopefully – make sense by the time ends, but there is also a niggling feeling that Atmo HorroX doesn’t want you to think at all. Are we meant to sit back and enjoy this trippy journey or nit-pick every moment so that we can understand what’s happening? That’s purely up to the individual, because there is a lot of fun lying within its apparent nonsense; sit back, relax and bask in the blinding visuals that are frequently as barmy as the film’s events. Enjoy the orange man with high heels on his hands and nod along with the family picnic as if you have any idea of what they’re saying to each other. Or, put on your deerstalker, pretend to be Sherlock Holmes and piece together this insane mystery that is crying out for an explanation.

Atmo HorroX is an impossible, intriguing film that will leave you with a thousand questions. Many will detest its incoherence and complete disregard for a comprehensible narrative, but others will fall in love with its utter lunacy. I am leaning towards the latter side and I hope you do, too. Sense or no sense, Atmo HorroX is mind-boggling and unforgettable.