Asylum Press unleashes the horror for September 2022 with an onslaught of terror comics!

These issues are available for pre-order in the July 2022 Diamond Previews Catalog. Asylum Press asks that you place pre-orders with your local comics shop before July 18th.

Vampire Macabre:Nosferatu Special #1 (One Shot)
(W) Frank Forte, Tim Vigil (A) Frank Forte, Edu Menna (A/CA) Tim Vigil
Asylum Press brings you a horrific blood thirsty collection of all-new Vampire tales. Featuring an international cast of artistic talent. Frank Forte delivers another instalment of our favourite vampire queen Nosferazixx! Frank Forte and Edu Menna revive Zephira: The Night Killer for another round of post-apocalyptic vampiric action. And lastly, Tim Vigil (Faust, Gothic Nights) gives us “Feline Fatale” A seductive female Vampire wakes up from her coffin and prepares to walk the night, she is interrupted by a prowling black cat. A must for all vampire fans! 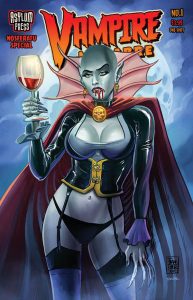 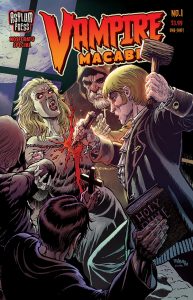 Vampires: Blood Shot One-Shot
(W) Steve Banes (A) Harry Lazarus, Frank Forte, Mel Keefer (A/CA) Sid Check
Mr. Karswell cracks open another coffin-loaded collection of foul fanged, bat winged terrors from the Golden Age of pre-code comics! Six sinister tales to assault your salivating senses as you’re transported back in time to face a rather bloodthirsty ancestor in “Blood for the Vampire!” Legendary artist, Mel Keefer asks you if there’s anything worse than a “Special on Beet Soup?” And then Harry Lazarus unleashes one of the most insidiously mad monster mash-ups ever in, “The Wolpire!” Plus, a “True Vampires of History” lesson, a shivery superb cover by Syd Check, additional crypt classics from Harvey, Stanley Morse, and lots more! 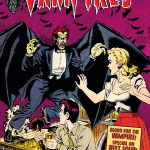 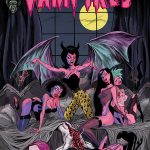 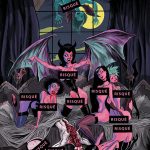 Vampire Verses Ltd. Edition #1 (of 12)
(W) Frank Forte (A/CA) Frank Forte
This debut issue introduces Angelika, an exotic dancer in the NYC club scene who is unwittingly turned into a creature of the night. As she tries to make sense of what she has become she learns of a bloody Vampire War that is being fought in the streets and subway tunnels of New York City. Slowly the truth unfolds as Angelika begins to realise she is a key part of an ancient scrolled prophecy known as The Vampire Verses. Limited to 1000 copies. Original first printing. Signed by Frank Forte in gold ink. This issue come bagged and boarded with COA.

FEARLESS DAWN #2 (OF 4) CVR A MANNION SGN ED
W) Steve Mannion (A/CA) Steve Mannion
Get the first printing of this amazing series while it lasts! Signed by creator Steve Mannion. Comes bagged and boarded with Certificate of Authenticity. 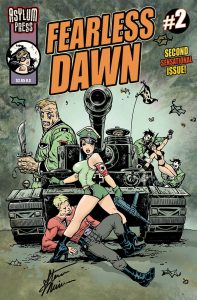 EEEK! TPB
( W) Jason Paulos (A) Jason Paulos (CA) Aly Fell
Taking a pinch of black humour from EC comics and mixing it with the art stylings of Warren comics, EEEK! blends a heady broth that hits you like a burning incense stick to the retina. Jason Paulos delivers the goods with over 15 tales of revenge, zombies, vampires, ghouls and monsters. Each tale drawn in a different style reminiscent of the B&W horror mags of the 70’s and 80’s. Includes full colour section and sketches.
JUL221222

Asylum Press brings you a giant flesh rotting collection of all-new zombie tales with an international cast of artistic talent. Szymon Kudranski brings us “The Barber,” a tale of the undead and the Mob. Dwayne Harris unearths zombies from 1776 in “Deadcoats.” In “Creature Converts,” a cat lady’s feline friends develop a taste for the flesh. In total, over 15 tales of the undead will leave you hungry for more!
JUL221223

About Asylum Press
Asylum Press is a Los Angeles-based comic book and graphic novel publisher. The company publishes high-concept books from the industry’s top talent within the horror, fantasy, and action adventure genres via a bold new business model that focuses on digital publishing and new distribution outlets in both the American and international markets. Its flagship titles include Fearless Dawn, The Bomb, Chopper, Black Powder, Warlash, and the popular horror anthologies Zombie Terrors, EEEK!, Asylum of Horrors, and Satan’s 3-Ring Circus of Hell. For more information, visit http://www.asylumpress.com.