An extremely impressive trailer has been released for, what appears to be, Russia’s answer to Arrival. Titled Attraction, the film sees a UFO land in the city during a meteor shower, causing people to question humanity’s place on earth. The more aggressive city-dwellers demand the alien ship leaves the planet, triggering conflict between those who want to start a war and those who want to learn more about the other worldly visitors. 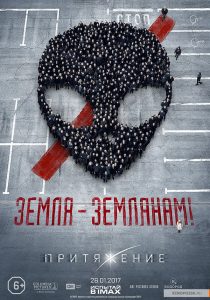 Despite the film embodying a very typically sci-fi blue and orange colour palette, the visuals and special effects that are showcased look fantastic. It looks slick, polished and effortlessly cool, with a generous helping of metaphorical undertones and thematic depth thrown in for good measure.

We’re extremely excited to see this film if it gets a UK/USA release. For now, the only release dates that have been set are for China and Russia, where the film will be released on 26th January 2017.