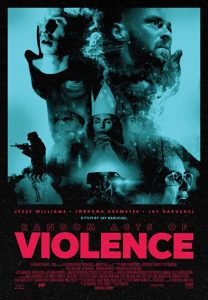 With a title like Random Acts of Violence, you’d be right in thinking that director Jay Baruchel’s sophomore feature is incredibly violent. Following comic book creator Todd (Jesse Williams) as he embarks on a road trip to promote the final issue of his popular Slasherman comic series, the film—which hit Shudder in the US, UK, and Ireland this week—features all the blood and creatively displayed corpses we’ve come to expect from a modern slasher movie. But far from killing for killing’s sake, Random Acts of Violence instead serves as a meditation on the cycle of violence, trauma, and art—and the morality of those who perpetuate it.

It’s an uncomfortable watch, one that will make audiences squirm not just from the raw and unflinching nature of the violence (including a particularly nasty shot of a blade piercing both of a character’s hands), but also from the uneasy questions it raises about the consumption of violent media—like why we root for the killer over the victims and what impact that has on how we view true crime in the real world. As we wrote in our review out of Fantastic Fest last year, Random Acts of Violence is a movie that “will hold your attention even while pushing you away.”

It’s a difficult balance to achieve. But for Baruchel, who also co-wrote the screenplay with Jesse Chabot, the biggest concern was not whether the film would push viewers too hard, but whether it wasn’t pushing hard enough.

“I remember when we handed in what was basically the draft that we’d end up shooting, being like, ‘Did we leave some harsh on the table?’” he told Scream with a chuckle. “I don’t necessarily feel that way anymore.”

Baruchel’s journey to making Random Acts of Violence began almost a decade ago when he and Chabot were asked to create a pitch based on Justin Gray and Jimmy Palmiotti’s 2010 graphic novel of the same name. What started out as an assignment soon became Baruchel’s baby. He was so determined to make the film a reality that he even snuck easter eggs for it into his debut feature, Goon: Last of the Enforcers, a sequel to Michael Dowse’s 2011 sports comedy Goon.

While the lengthy development process would leave many tearing their hair out, in hindsight, Baruchel says it gave him an opportunity to refine and perfect the script. To ensure they were striking the desired note, he would even show sequences to his stepdad, who would tell them if they should amp the gore up or tone it down based on his own experiences as a combat veteran and emergency room nurse. A lifelong horror fan, Baruchel saw the potential to make a flick that was genuinely scary and disturbing, while simultaneously taking an analytical look at the genre.

“No one goes to see a horror movie to not be scared,” he points out. “A horror film that doesn’t scare you, I would argue, is to at least some degree unsuccessful. So yeah—we just built the story as strong as we could and tried to scare the fuck out of people.” 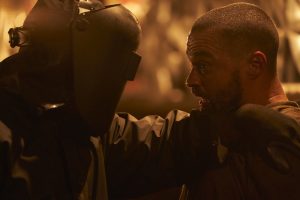 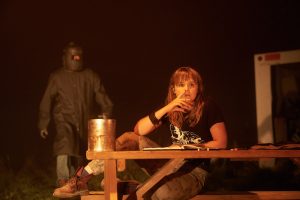 After spending so much time with the material, which asks challenging questions about the responsibility of creators, Baruchel admits it’s had a lasting impact on his own approach to filmmaking. He still wants to make horror and action movies, saying he can’t ever see himself making a film where some nobody gets their ass kicked. But just as Random Acts of Violence will sit with viewers long after the end credits roll, its shadow may fall over Baruchel’s work for the foreseeable future.

“Once an idea takes hold in your head, it’s hard to get rid of,” he told us. “The dialectic in this movie, because it’s one that we’re sort of a part of and are interested in and subscribed to, to a degree—I don’t know if I will ever be able to divorce myself from that completely. So it already has, in a profound way, affected stories we were interested in telling going forward. And we might still be interested in telling them. But taking this journey and having made this movie and having it leave the imprint on us that it’s left… It would be not just hypocritical, it would be impossible not to take it with us.”