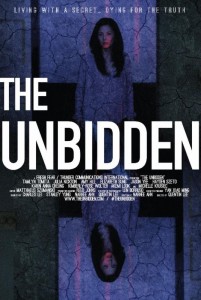 Margin Films has put out the first trailer for The Unbidden, a female-driven supernatural horror directed by Quentin Lee, in his first foray into the genre.

The Asian-American cast is headed by Tamlyn Tomita (The Eye, True Blood), Julia Nickson (Rambo: First Blood Part II, Half-Life), Amy Hill (50 First Dates, Scrooged) and Elizabeth Sung (Memoirs of a Geisha, Lethal Weapon 4) as friends who attempt to save one of their own from a dark and malevolent presence.

Mystery novelist Lauren Lee (Tomita) is haunted by the ghost of a tortured, bloodied man. She tries to forget the apparition’s terrifying warnings and her unstable mental state by hosting dinner with her best friends (Nickson, Sung and Hill). Each of the women has her own idea and opinion to make Lauren feel better. In the midst of a séance that Rachel believes will exorcise Lauren’s demons, a mysterious young man (Hayden Szeto) arrives brandishing a gun. He holds the women hostage in order to get to the truth of the whereabouts of his missing father. 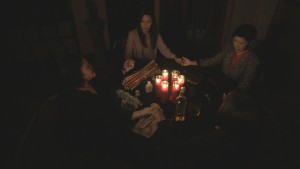 “If you’re a fan of the horror, psychological thriller, family melodrama or Asian American film genres, you’re in for a treat, not a trick,” director Lee says of the film. “Our intention was to create a wildly original independent feature with an all Asian-American cast that aims to not only entertain with shocks and thrills, but bring on the debate about difficult emotional issues. This is a female-driven film that deals with domestic violence and the morality of retribution.”

The Unbidden is due to appear on festival bills this year.