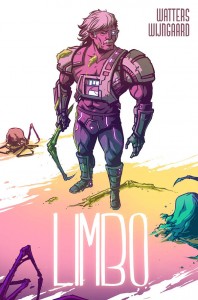 I’ve always found penultimate issues to be somewhat problematic. Often they feel like an interval, stopping the action for no other reason than to build up to a finale. But issue five of Limbo does it the right way, giving us long-awaited answers, and making sense of the seemingly random world that Watters and Wijingaard have created.

In the last issue, we saw detective Clay getting attacked by a Mesopotamian sea-monster. With his fate still uncertain, Watters focuses instead on Limbo’s folkloric aspects, incorporating two chthonic deities from Haitian mythology. This enables Watters to address some unanswered questions from previous issues, namely in regards to Clay’s back story and how he ended up in Dedande City. The dialogue, which is as funny as it is profound, asks some interesting questions about identity and solipsism, elevating Limbo into something far more academic and intellectual than it might, at first, appear. 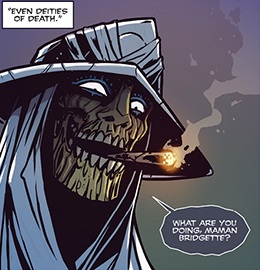 But the narrative itself is deceptively simple. Sandy, shamaness and phonomancer, traverses the land of the dead in an attempt to save Clay’s life. Sandy’s story may be relatively easy to follow, but Watters’ writing is so detailed that it never feels superficial. With echoes of Gaiman’s American Gods, Watters’ interpretation of the war between mythology and technology is unlike anything I’ve seen before in a comic.

Wijingaard’s illustrations have always been a big selling point for the series, but issue five is unquestionably his best work to date. Set almost entirely in a metaphysical plane of existence, the artwork here is illusory and strange – replete with ruined graveyards, febrile bayous and purgatorial crossroads – all coloured exquisitely in his 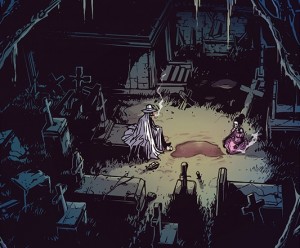 trademark neon hues. Yet Wijingaard is equally adept at creating disquiet in the reader. From talking spiders to the skeletal designs of the Haitian gods, Limbo shows the breadth and scale of Wijingaard’s talent, which – at this point – seems to have no discernible end.

The fifth issue of Limbo shows two young creators at the very top of their game. This is storytelling at its most lucid and intelligent, with art that is beautiful, odd and incomparably magical. If issue five is any indication of things to come in the final chapter, Limbo is gearing up to become one of the strongest Image series in a long time.