The splatter-heavy new trailer may not be making an appearance at the San Diego Comic-Con this week, but Season 2 of Ash Vs Evil Dead is certainly on the menu. A new still from the upcoming season has been revealed, and it shows Ash’s father, Brock, brandishing a boomstick of his own. The image comes from EW, who also talked to Bruce Campbell about the character, played by Six Million Dollar Man Lee Majors, and the new season in general. 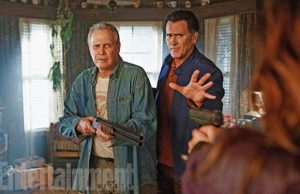 “He’s even grumpier than Ash,” the horror icon told the site of his character’s father, who is one of two key new characters, the other being Ash’s childhood friend Chet Kaminski, played by horror favourite and brother of Sam, Ted Raimi.

And what of Ash’s unlikely sidekick, Pablo (Ray Santiago)? “Pablo’s got a crazy journey this year,” Campbell says. “The stuff he goes through makes my life seem easy. I think we’re going to find out that he’s not just Ash’s sidekick. I don’t think Ray had any idea what was coming. Some of the horrors that await Pablo…”

Season 2 catches up with Ash trying to put his Deadite-battling behind him, and enjoying some heavy drinking and serious partying. But his period of relaxation doesn’t last long. “We find Ash right where he wants to be: having keggers, and hanging with chicks, and living the good life in Jacksonville,” Campbell continues. “He’s through with all this business. No strings on him. And what could possibly go wrong, right?”

Ash will return to his roots in the autumn, when Season 2 of Ash Vs Evil Dead airs on Starz.