Ash Vs Evil Dead Fights its Way to Disc in August

Well, it’s taken a while, but season 1 of Ash Vs Evil Dead is finally headed to home video, just a month before season 2 hits screens. 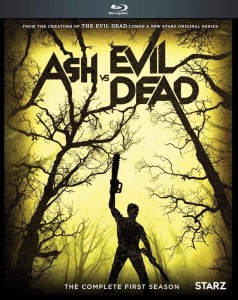 The first series premiered on Starz on Halloween last year and was pretty damn groovy, providing laughs and Deadite-slayings aplenty, whilst keeping, for the most part, consistent with the tone of the films. Bruce Campbell reprised his signature role for the 10-episode series, which also starred Ray Santiago as Ash’s unlikely sidekick Pablo, Lucy Lawless as mysterious antagonist Ruby and Dana DeLorenzo as Kelly, an unwitting soldier thrown in the fight against the Deadites.

Season 1 will be released on DVD and blu-ray in the US on August 23rd, exactly 1 month before season 2 premieres. A UK release follows a month later, which is great for British fans, many of whom could only see the series through less-than-legitimate means.

Why it’s taking almost a year to get from TV to disc is anybody’s guess; perhaps the thinking was to get people hungry for more just in time for season 2.