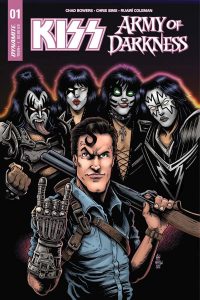 Uniting two of their hottest commodities, Dynamite will drop the first issue of the miniseries in February, 2018. Chad Bowers and Chris Sims are writing the series, with and artwork coming from Ruairi Coleman. The debut issue will feature three art covers from Kyle Strahm, Goni Montes, and Ken Haeser. You can take a gander at them below. 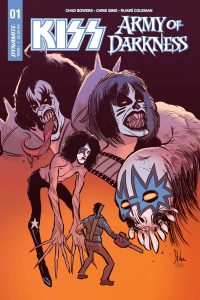 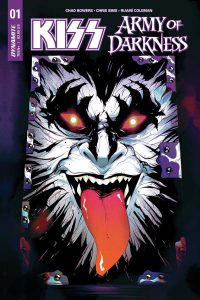 Here’s what you can expect from issue#1:
“KISS is on top of the world and rocking faces until the night disciples of The Destroyer show up and the band disappears. With the tour canceled, a young Ash misses one of the most important events of his life that will change his destiny. Now the Chosen One has to get back on the right path.”

It remains to be seen which weapon will be more effective against the Deadites: a boomstick or a Love Gun.