Artwork Revealed for The Gallows

The Gallows may not have been the horror hit that it so desperately desired to be; serial killer Charlie was no match for classic horror icons Freddy and Jason, but it still grossed a fair bit when you consider its meagre budget of $100,000. 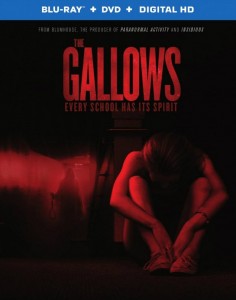 It will be interesting to see what scenes did not make the cut and it’s always a bit of a laugh to watch a gag reel, especially on a horror film as they usually have a lot fun on-set.

The cover art’s choice of design is not surprising and features, perhaps, the most famous and scariest scene from the film. The Gallows was far from awful and it can’t be denied that it was visually impressive, even if some of the scares fell a bit flat.

Synopsis:
Twenty years after an accident caused the death of the lead actor during a high school play, students at the same small town school resurrect the failed stage production in a misguided attempt to honour the anniversary of the tragedy – but ultimately find out that some things are better left alone.