Artsploitation has acquired the rights to the stylish and pulpy American indie Rondo. The film is described as a mix of black comedy, slasher and revenge thriller, so we’re certainly intrigued by it. 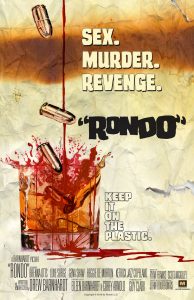 Synopsis:
Paul, a troubled young veteran, is told by a psychiatrist that sex is the solution to his dependency and drinking problems. But things turn out otherwise as Paul and his sister are sucked into a criminal underworld where sex and murder are daily specials and revenge is served piping hot.

When speaking about the company’s acquiring of Rondo, Artsploitation’s Ray Murray said:
“The moment the ominous voice-over begins in Rondo, I was taken away to my youthful times at 42nd Street grindhouses, where great exploitation films taught me all there is to know about movies. Director Drew Barnhardt pays homage to these films while injecting his own dark modern touches. Intelligent, craftily stylised and wildly entertaining, Rondo is a film that screams, “Artsploitation.”

The film will hark back to the days of early Exploitation, so expect it to be bloody, brutal and very violent. Rondo will be released on DVD, Blu-ray and Digital HD in early 2019, so look out for it in the New Year.