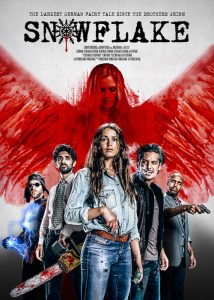 One of many intriguing genre films to appear at this year’s EFM was Adolfo Kolmerer and William James’s nightmarish meta fairytale Snowflake, which premiered back in November at Chicago’s Cinepocalypse Film Festival. The film has just been acquired by Artsploitation, who will release it in the second half of 2018.

Boasting a pretty out there premise, Snowflake is set in Berlin in the near-future, and concerns a bunch of gang members hunting down the person who murdered their families. Along the way, they find themselves trapped within a fucked up fairytale within a screenplay penned by a deranged dentist, and must contend with Assassins, maniacs and a blood-spattered angel.

The debut feature for its co-directors, Snowflake looks like something pretty special. Check out the previously-released trailer for proof.